If tech futurists are to be believed, by the year 2050, robots will do many of our errands and drive our cars. If a new study on religious trends is to be believed, many of those robot-controlled cars will stop and park at mosques and churches.

Yes, despite predictions that religion will go the way of dinosaurs, the size of almost every major faith — sorry, Buddhists — will increase in the next 40 years, according to a study released Thursday by the Pew Research Center.

The biggest winners, Pew predicts, will be Islam and Christianity.

Islam, the world’s fastest-growing faith, will leap from 1.6 billion (in 2010) to 2.76 billion by 2050, according to the Pew study. At that time, Muslims will make up nearly one-third of the world’s total projected population of about 9 billion people.

Christianity is expected to grow, too, but not at Islam’s explosive rate. The Pew study predicts Christians will increase from 2.17 billion to 2.92 billion, composing more than 31% of the world’s population.

This means that by 2050, more than 6 out of 10 people on Earth will be Christian or Muslim. And, for perhaps the first time in history, Islam and Christianity would boast roughly equal numbers. 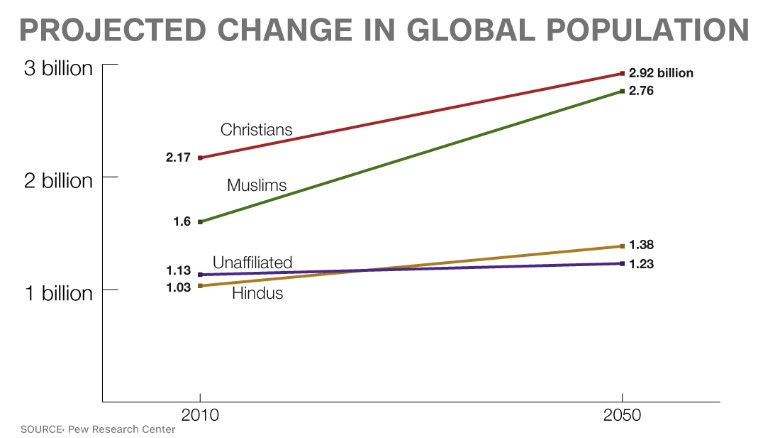 Looking even farther into the future, Islam’s population could surpass Christianity by 2100, Pew says, despite Christians’ six-century head start. (It’s possible that Muslims outnumbered Christians some time in the past, perhaps during the Black Plague that decimated Europe. But scholars aren’t certain.)

Based in Washington, Pew is a nonpartisan “fact tank” that regularly produces sweeping surveys of this kind without taking public policy positions. Six years in the making, its study collected data from 234 countries and territories to predict the fate of five major faiths — Buddhism, Christianity, Hinduism, Judaism and Islam — as well as folk religions and the religiously unaffiliated, including atheists.

The study, which Pew says is the first of its kind, bases its projections on the age of populations, fertility and mortality rates, as well as migration and conversion patterns. Simply put, Muslims are having larger families, retaining more members (conversions are illegal in some Muslim nations) and are younger than adherents of other faiths. More than 1 in 3 Muslims is younger than 15.

But religious trends have never been measured on the study’s vast scale, Pew says, so a few cautions are in order.

First, the population projections are based on current data and assumptions about demographic trends. For example, Muslim women have an average of three children, the highest of any religious group. In the future, if education and employment rates rise, those numbers could change.

Second, nobody at Pew has a crystal ball, so events like cataclysmic wars, rampaging diseases, natural disasters and economic meltdowns could throw the numbers off.

But it’s clear from the 245-page report that Pew and the demographic experts they consulted did their homework, so the study is worth taking seriously. With that in mind, here are some of the study’s top findings about what the world will look like — at least, faith-wise — in 2050.

— Atheists, agnostics and religiously unaffiliated people will increase in the United States (from 16% to 26%) but decline as a share of the total worldwide population.

— Also in the United States, Christians will drop from 78% to 66% of population. Muslims will surpass Jews as the largest non-Christian religion in the U.S.

— Sub-Saharan African will be home to 40% of the Christian population and Nigeria have more Christians than any other country except for the United States and Brazil.

— India will have the largest Muslim population in the world, passing Indonesia, but Hindus will retain a majority.

— More than 10% of Europeans will be Muslim, while the number of Christians in Europe will drop by 100 million.

— In the coming decades, 106 million people are projected to leave Christianity. (46 million will convert to Christianity, offsetting the losses a little.)

— The number of countries with Christian majorities will drop to 151, as Christians are projected to decrease in Australia, Benin, Bosnia-Herzegovina, France, the Netherlands, New Zealand, the Republic of Macedonia and the United Kingdom.

— Muslims are expected to make up more than 50% of the population in 51 countries, including the Republic of Macedonia and Nigeria.