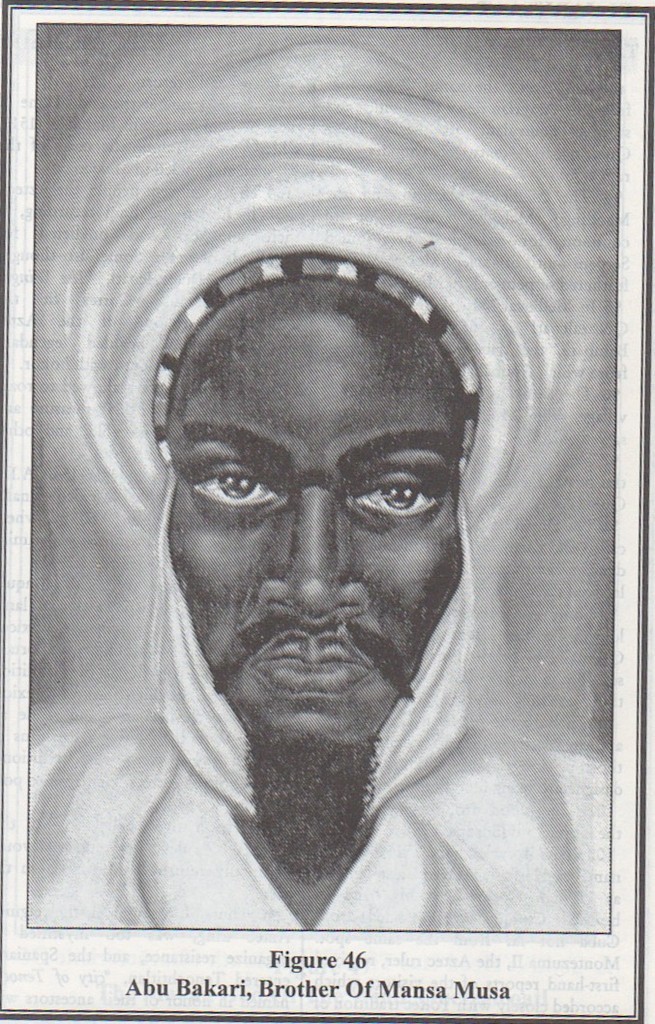 In any basic history lesson, the Italian Sailor/explorer Christopher Columbus has a famous name as the discoverer of the new world. Till date, this has been of global acceptance as for over 500 years. Education has been in the hands of the Europeans, who many believe imposed what profited them while scorning or amending what did not.

As the waves of knowledge keep spreading, the acclaimed achievements of a number of “European” expeditions are now being observed with scepticism. One of such expeditions is the true ownership to the discovery of America.

Citing the book written by the famous Egyptian scholar, Ibn Fadi Al-Umari in 1342, there were two large voyages across the Atlantic Ocean preceding that of Columbus. Both Expeditions were pioneered by one man, Abubakari or to give him his rightful name, Mansa (King) Abubakari II.

In the time of the Malian Empire, the general conception was that on the other end of the Atlantic lied the end of the world. This delusion took its roots from then primitive Europe. Abubakari on the other hand was far from convinced. If the Niger had its beginning and its end, then the Atlantic Ocean must have its end with people living on its shores. He also felt this could be a sea root to Mecca. With the quest for knowledge burning in him, Abubakari sent out 200 ships. Their duty was to sail across the Atlantic, with the aim of finding out what lied beyond. It was recorded that only one of the ships returned. Its captain claiming to have turned around when he saw the other ships disappear into the wild ocean.

Abubakari was not convinced by the captain’s testimony. This further increased his thirst to discover what lied on the other end of the Ocean.

13th century Mali was a centre of excellence in Abubakari’s time, though reaching its peak after his era with Timbuktu having the second oldest University at that time with students numbering more than that of the University of New York. Courses such as mathematics, geography, history, astronomy, chemistry as well as Islamic studies flourished in Timbuktu. Mali was a center for trade, the exact spot to meet all who made the world spin. With the aid of the ship builders from Egypt and Mali, Abubakari built ships off the coast of Senegambia. His ships were 2000 in number. With this, he was to use to discover the end of the ocean. Abubakari was no coward. He insisted on accompanying the ships across the ocean.

In the year 1311, Abubakari abdicated his thrown to Mansa Musa. Not a son of his (contrary to contemporary literature). Abubakari equipped 1000 of his ships with the finest men, sorcerers, physicians, sailors and navigators. Every ship had supply ship attached to it. The number of ships totalled 2000. The other 1000 ships were loaded with foodstuffs, drugs, fruits and drinks to last his team for 2yrs. It was believed that Abubakari arrived on the other end of the Atlantic in the year 1312. Proof of the Malian expedition can be noted in the names given to places in Haiti as the Malians renamed places after themselves. Examples of such are Mandinga Port, Mandinga Bay and Sierre de Mali. Lots of other proof abound and many more keep unfolding. There is also a Malian folktale which gives reference to  this great expedition.

How could this be possible in Abubakari’s time? From a scientific point of view, the Atlantic is governed by 2 currents, which usually remain the same irrespective of month or season. These are the Guinea Current and the Canary Current. Both possess currents powerful enough to pull a ship form the coast of West Africa to the Americas. It is at end of these currents that you see the signs of negroid presence in the Americas.

It would therefore be suspected that Columbus employed similar knowledge of the currents of the Atlantic to sail across to the Americas. Such could only have been possible through the help of someone familiar with the rout. Hence the speculation that Columbus was accompanied by an African, Pedro Alonso Nino, who helped him navigate the Atlantic, appears more credible. It must be made clear that Columbus recorded seeing blacks in America. He also recorded seeing a building which looked like a mosque. The Malians were Muslims and hence there is a possibility that the mosque could have been erected by Malians. Columbus also recorded seeing a ship, filled with goods just departing the coast of guinea and heading in the direction of America.

In addition to the above, another proof of this voyage comes from words of Mansa Musa, the successor to the thrown. Upon his arrival in Egypt, it was obvious the Egyptians were expecting to see Abubakari for the Hajj. On arriving in Egypt, Mansa Musa was quoted as explaining how ascended the thrown of Mali. Once again citing the manner King Abubakari had given up his thrown to contribute to global knowledge. A trait lacking in present day African rulers.

The presence of the Malians on American soil may thus be the reason for the presence of African crops such as Banana Plants and mango to mention a few.

This incredible history of Abubakari’s adventure should be a great area of interest to all black educators, especially in rewriting world history which has been focused on imposing Eurocentric perspectives. Anything short of this would be depriving not just the black youth but the entire world of true history.

I must add before drawing the curtains, this article is not meant to scorn Columbus. Columbus till date ranks amongst the finest explorers of all time. Christopher Columbus was great, but the discovery of the Americas belongs to King Abubakari II.

Originally posted: The Battle for the Americas Mansa Abubakari II – 181 years before Columbus