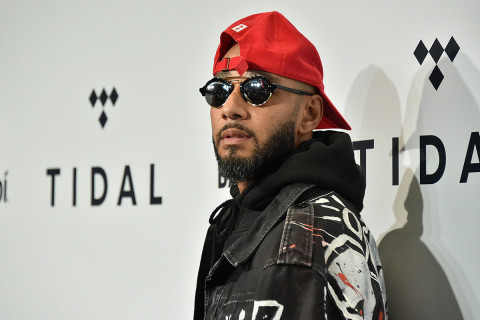 A track featuring Kanye and Bono didn’t make the cut, but it could end up on one of the four other albums the super producer has in the works

After over a decade of teases, one-off singles, and title changes, super producer Swizz Beatz has finally announced the release of his second solo album, Poison. The follow-up to 2007’s One Man Band Man is due out this summer via Epic and features Kendrick Lamar, Nas, Lil Wayne, Pusha-T, Young Thug, 2 Chainz, the Lox, Giggs, Jim Jones, and more. “You can hear the passion from everyone on the record; they wanted to be a part of it,” he told Pitchfork in a recent interview at Jungle City Studios. “It wasn’t a transaction. When you hear other features on a lot of projects, it feels like a transaction. You’re either chasing hype or it’s a transaction.”

Swizz wrote 70 songs to get down to the 10 he included on the track list. He said he has four more albums ready to go following the release of the hip-hop-oriented Poison: an R&B album, an “energy” album (“You want to go to the gym? You want to be motivated? You press play on this shit”), an “acoustics” album, (“It’s just vibes. It’s just for Sundays,”) and a “global” album featuring international artists. “All different concepts, all different messages, all different sounds,” he told Pitchfork. “I’m not trying to put this out and then go on a hiatus. I’m trying to put this out and then before you know it, you’re seeing the intro to something else. I want this to be a continuation of bodies of work, so people are getting used to me being back in this ring and being unpredictable and ultra competitive.”

Swizz told Pitchfork that the Nas feature on Poison was originally recorded for an as-yet-unreleased Nas full-length the two made together. “I did his album two years ago in one week in L.A.,” he said. “In the studio every day at 12 o’clock, just bang bang bang. Recorded the whole thing, got it all on film. It was an ill process.” Swizz described the Nas tracks as “super crazy, maniac shit.”

Explaining the album title, Swizz said, “Everything is poison. You look at the times we live in, you look at everything, and in order to get past that, you have to address that. You can’t just skip over it.”

He added, “I took all the hits off my record, meaning anything that felt too big that the rest of the record wouldn’t live.” That included a track featuring Kanye West and Bono from U2, and another one featuring Bruno Mars. “It’s just not that record. It might be on my next record, but this particular record I wanted to occupy the ground floor, which I came from, polish that, and then let people come with me to the middle of the building or the penthouse or the roof, and then just start everything over again.” Swizz recently released the new song “It’s Okayyy,” which will not be on the album.