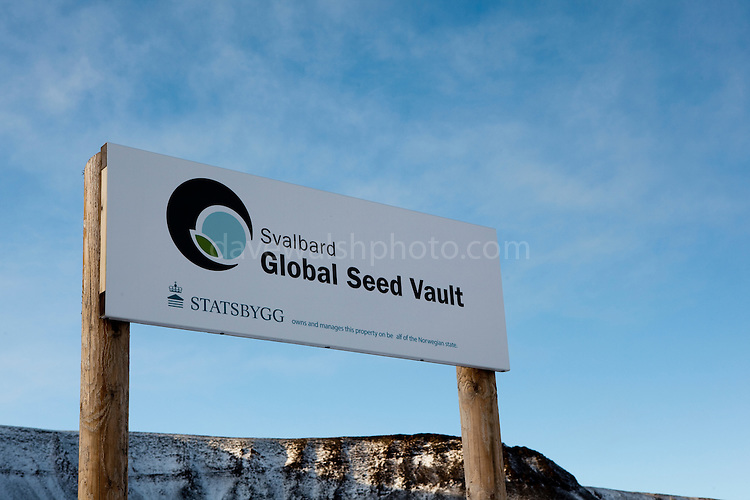 Sparkling amid the gray gloom of autumn in the Arctic, the jewel-like entrance juts out of the snow and ice. Built of angular concrete, it looks like a stylish supervillain’s lair.

But this isn’t a Bond bad-guy’s hideout. Instead it is home to something that could help save the world in the wake of environmental catastrophe: Seeds.

Millions and millions of seeds are stored here, deep beneath the icy permafrost of Svalbard, midway between Norway and the North Pole, and well out of reach of warfare and rising sea levels.

“This vault is built for humanity to survive,” explains Michael Koch, from the Crop Trust, leading us along a tunnel, into the Global Seed Vault.

Svalbard was chosen to house the vault because it is geologically stable, and because, despite its remoteness, regular scheduled flights make it relatively accessible.

“It is like a holy place,” says Koch, standing in the vast space, carved into the side of a mountain. “Every time I come here I feel like I’m in a cathedral. This is a place to pause and to think. It’s a unique place, a very important place for humanity.”

At the end of the tunnel, a heavy metal door glints beneath a coat of ice; on the other side, the key to mankind’s salvation in a post-apocalyptic world.

This is our insurance policy: 837,931 samples — an estimated 556 million seeds in total — (though new shipments are arriving all the time) stored at a constant temperature of -18 degrees Celsius (-0.4 degrees Fahrenheit) to prevent them degrading.

The permafrost creates a natural refrigerator — even if the power failed, the temperature inside would eventually stabilize at -8 degrees Celsius (17.6 degrees Fahrenheit) — low enough to keep the vault’s precious contents safe for decades.

The seeds are carefully packed inside airtight, triple-layered aluminum bags, and locked into crates before being shipped here from Nigeria, India, the U.S., Peru and almost every other country on the planet.

Many of the 2,291 crates stacked in here are gray or black plastic, with sticky tags and code numbers to identify which gene bank they were sent from. But a few stand out amid the ranks of metal shelves: Wooden, with painted labels, these have come from North Korea.

The vault functions like a bank’s safety deposit: Once placed inside, the boxes cannot be opened or removed by anyone outside the institution which sent them — they are simply kept safe, their contents untouched, until they are needed.

Earlier this month, seeds stored inside the so-called “Doomsday Vault” were withdrawn for the first time as a result of the Syrian civil war.

Scientists from the International Center for Agricultural Research in the Dry Areas, who have had to flee their base in Aleppo, Syria for a new home in Lebanon, requested the return of many of their seeds so they can plant and regenerate them, and resume the important research they’ve been doing for decades.

From maize, wheat and barley to lettuce and potatoes, the seeds stored here represent a diverse collection of food crops from across the globe.

Their genetic traits could make them vital, if a species were ever wiped out in the wild, by drought, war, or floods: Australian wild rice which is resilient to pests and disease, for example.

Koch says the need for a back-up plan is becoming more and more evident: “Agriculture is not adapting as fast as the climate is changing on us.”

“We have to adapt to rising temperatures, to wind and storms and flooding, to new diseases and pests, we have salt water coming into the rice paddies in the fields so salination is an issue.

The temperature inside the vault remains constant, but outside, scientists in Svalbard say they are already seeing first-hand the impact of the changing climate which may mean we have to call on the seed bank’s supplies in the future.

The archipelago is ground zero for climate change research, because fluctuations in the Earth’s atmosphere are more pronounced here: Experts say temperatures here have increased at twice the rate seen anywhere on Earth in the last several decades.

Ole Arve Misund, of the University Center in Svalbard says the waters around the archipelago are four to five degrees warmer than they used to be.

“Normally by March, these waters would be frozen over, a layer of ice so thick that people would take their snowmobiles from town to outlying areas,” he says. “But the last time they froze was a decade ago.”

“We know that climate is cyclical but the warming now is steadier and stronger,” explains Misund. “Temperatures in the western side of Svalbard are very variable. But now we see … more and more … that it is due to a general rise in sea temperatures of the world’s oceans.”

“I can obviously see a change,” he says, as he leads visitors on a boat trip out of Longyearbyen, where they are served drinks chilled by pieces chipped from the miniature icebergs which have broken away from the glacier.

“Last year you could hardly see the rock formation as a gray brown line underneath the glacier,” he says, pointing to the thick band of rock visible beneath the ice. “It is shedding a lot of ice; something is happening, for sure.”

As world leaders and environmentalists grapple with the tricky problem of reducing the impact of climate change, the seeds of the future have been banked here, in a “natural freezer” in the middle of the Arctic, as a failsafe against natural or man-made disasters.

If the worst were to happen, says Koch, “you could go back to Svalbard and recreate agriculture in the world.”

Roof of the Svalbard Global Seed Vault popularly known as the Doomsday Vault, for storing crop seeds deep inside a mountain. Longyearbyen. Svalbard