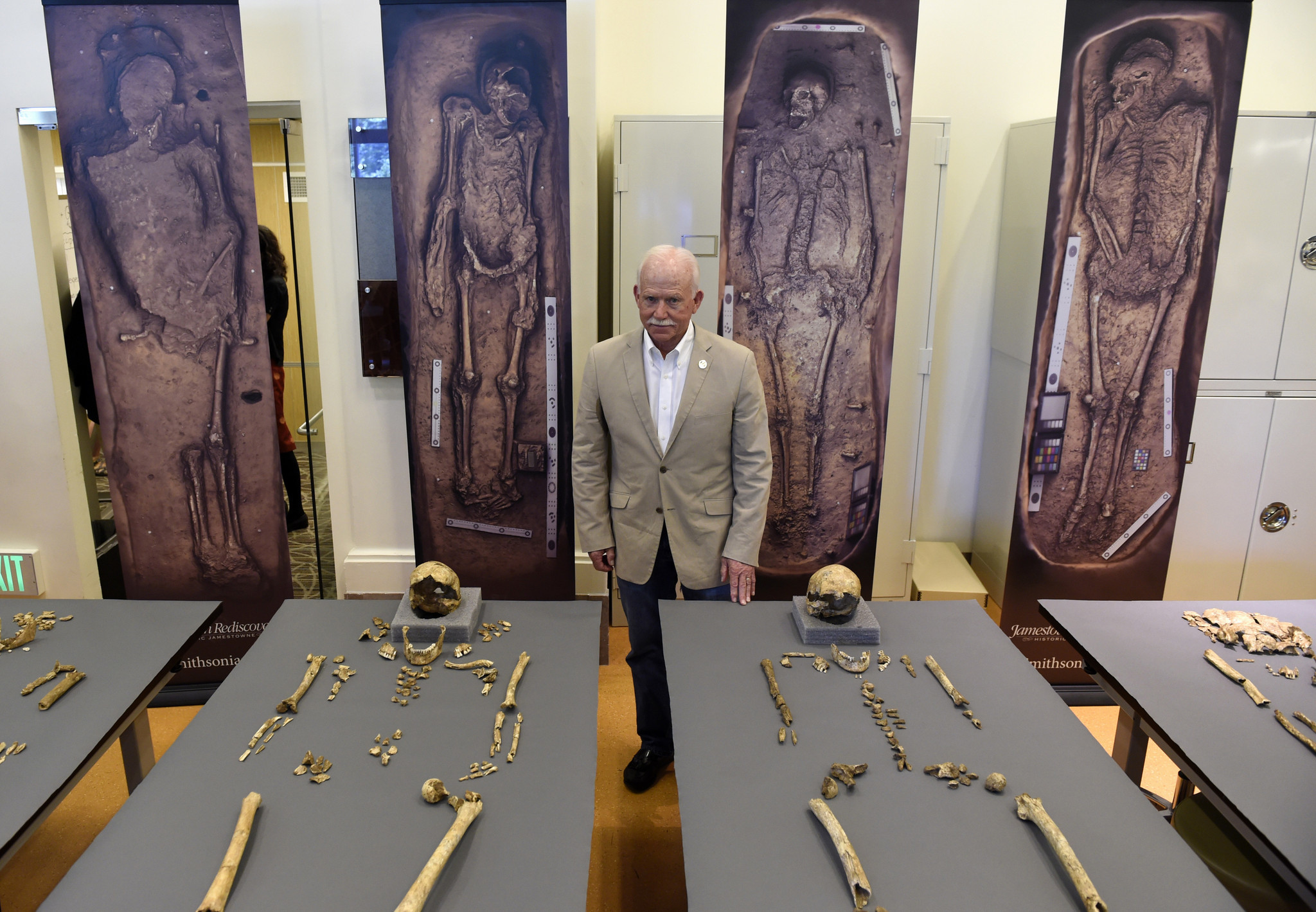 Scientists say they have identified the remains of four men who were among the early leaders of Virginia’s Jamestown settlement.

The bodies were exhumed in November 2013 in the church where Pocahontas married Captain John Rolfe in 1614.

It took two years of detective work and the latest scientific techniques to identify the badly-preserved bones.

It’s now known the remains belong to important figures who lived in Jamestown between 1607 and 1610, when the colony almost collapsed.

“This was a time of food shortages, Indian attacks and disease,” says James Horn, president of Jamestown Rediscovery. “These men helped established the colony and bring to life the challenges faced by the first settlers.”

The bodies were found in the church’s chancel, indicating they were people of great status in the community.

Using physical evidence at the site, analysis of the bones and extensive historical research, scientists narrowed the search down to these four men. 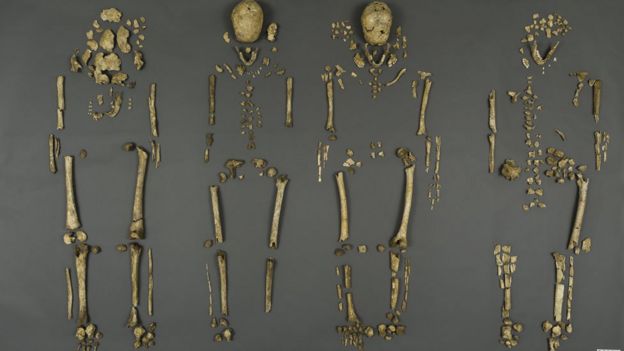 Perhaps the most important of the four is Captain Gabriel Archer. He was deeply involved in the colony’s politics and led some of the first expeditions up the James river seeking gold and silver.

He also took a deadly dislike to Captain John Smith, arguably the most famous of the settlers, and conspired unsuccessfully to have him executed.

Sir Ferdinando Wainman came as part of the expedition led by Lord De La Warr, which arrived in 1610 with fresh supplies and is credited with saving the colony from abandonment.

He was a military man and took charge of the community’s defences.

Like many early settlers, he did not adapt to the harsh Virginia climate and died a few months later from disease. He was the first English knight to be buried in America.

Captain William West was a relative of Sir Ferdinando and arrived on the same ship. He was killed by Native Americans near the location of present-day Richmond. Like Sir Ferdinando, he was buried in an elaborate human-shaped coffin. The remains of a silver sash confirms his high status.

The fourth man, Reverend Robert Hunt, was the first Anglican minister in America and arrived with the founding expedition in 1607.

Hunt nearly missed his chance to leave the shores of England. His acute seasickness was considered an ill omen by his companions who wanted to put him off the ship.

Part of his mission was to Anglicise Native Americans by converting them to Christianity, but he died a year later aged about 39. 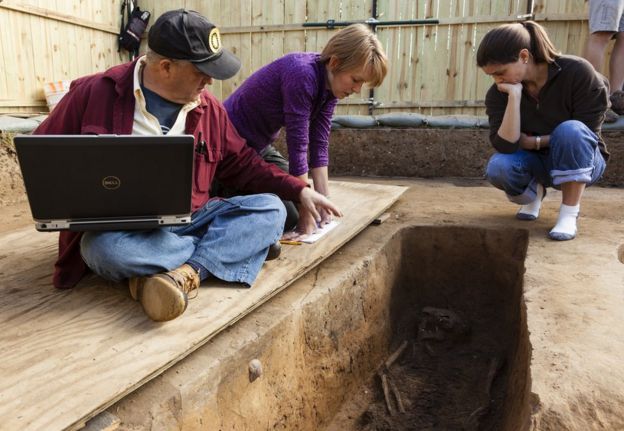 His grave faced west towards the people he served, which helped researchers identify him as a man of God.

“It tells us something about the importance of religion at Jamestown,” says Hunt.

“The fact that the Church of England was established here is very important because [the religion] was only half a century old at the time.

“It was an expression of a desire to establish a protestant bulwark in North America against Catholic Spain and Catholicism in South America. There was a lot at stake here and the success of this church and Anglicanism in Jamestown would have repercussions not just in America but all over Europe.”

The remains of the four men were taken to the Smithsonian’s National Museum of Natural History for forensic analysis. The results were compared with historical records to narrow the potential candidates for who they might be.

The presence of certain chemicals confirmed the men’s English origins, while evidence of a high protein diet pointed to relative wealth. But elevated levels of lead found in the remains are the most significant indication of their high social standing.

“Lead accumulates with age if you are exposed to it,” says Doug Owsley, head of physical anthropology. 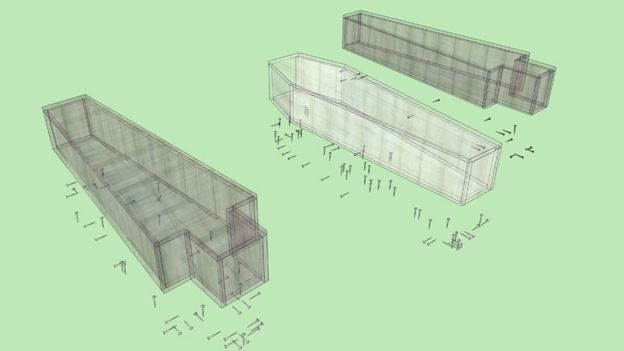 “If you come from a high-status household you’re going to have greater exposure because of where it comes from – pewter and fancy glazed ware. Pewter in this early time period was something for display but it leaches lead into the food you’re eating off the plate.”

Even though barely 30% of the bones are preserved and many are in tiny fragments, the tests showed that Sir Ferdinando and Captain West in particular had extremely high levels of lead.

The four leaders have been identified at a time when the site of Jamestown is under threat from rising sea levels. 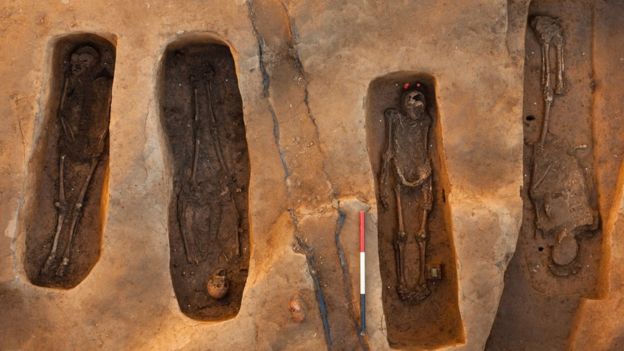 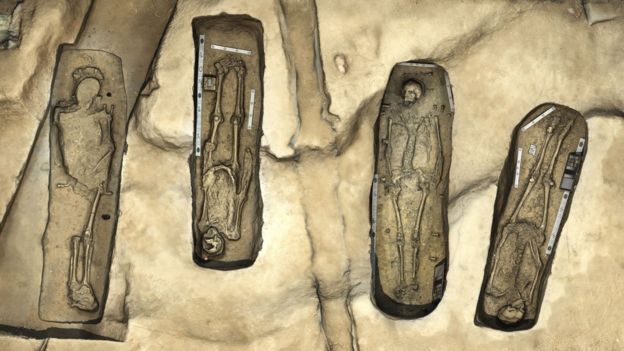 Archaeologists fear the acidity in the soil and flooding may destroy artefacts and remains still lying beneath the surface. The entire island could be submerged by the end of the century.

“It’s not going to happen overnight, but there’s a time limit on how long we can do archaeology,” says William Kelso, director of archaeology at Jamestown Rediscovery.

“Pottery lasts forever but wood doesn’t and iron used for armour and weapons is going to be gone. We have another 20 years I would think.”

Excavations at the original fort represent only a fraction of the settlement site which has already been compromised by other historical events. Fortifications built during the American Civil War almost destroyed the 1608 church.

“They just missed these graves. If they’d dug another four feet they would have been gone,” says Kelso. And according to Owsley, a 1930s utilities trench cut through the grave of Captain West, smashing the remains of his right leg.

There is still more research to be done. Genetic analysis may even help trace living descendants of the men.

But a big mystery remains. A sealed silver box was placed on the coffin of Captain Archer that scientists have been unable to open.

A CT scan revealed the shape of the contents, believed to be shards of bone and a tiny vial that may have contained holy water, and the digital information has been used to create three dimensional printouts of the objects.

But the meaning of a letter M carved on the box, why it was placed in the grave and by whom, may never be known.