This article appears in the Brownbook’s latest Fashion Directory, Dances of the Middle East and North Africa.

At the western edge of Omdurman, the largest city in Sudan, there lies a dry and dusty necropolis. Each Friday, under the westering sun, brethren of the country’s Qadiriyya Sufi order tread carefully across the cemetery’s shallow, sandy graves passing half-buried car tyres. The path leads toward the onion domes and conical roofs of Sheikh Hamed Al Nil mosque, which houses the tomb of its 19th century leader.

A pile of brightly coloured jelly sandals collects at the entrance to the mosque’s qubba, left behind by worshippers uttering prayers and exchanging salutations inside.

Some kneel at the late sheikh’s sarcophagus to take a handful of sand from his grave or to kiss its green linen kiswah; others wait to receive grace from the order’s incumbent sheikh, the son of Sheikh Hamed Al Nil. Many simply smoke Bringi cigarettes outside, sipping the sweet hibiscus chai offered by Khartoum’s popular ‘tea ladies’ as they patiently wait for the order’s weekly dhikr to begin 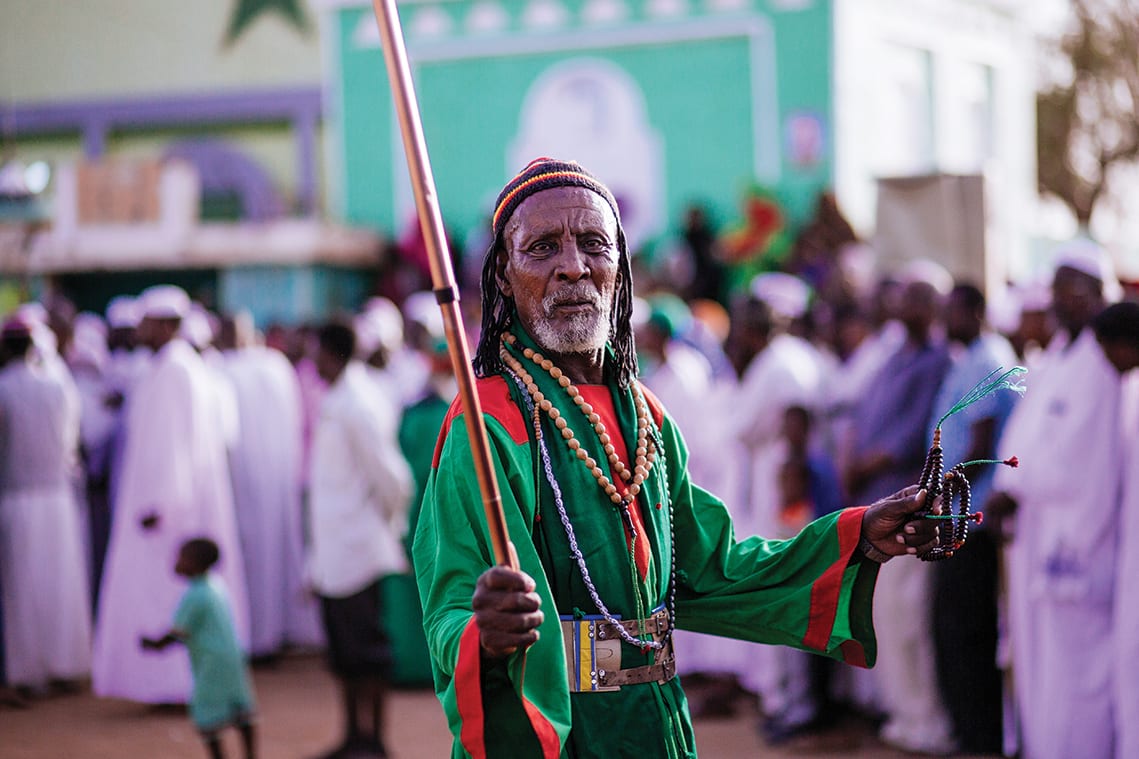 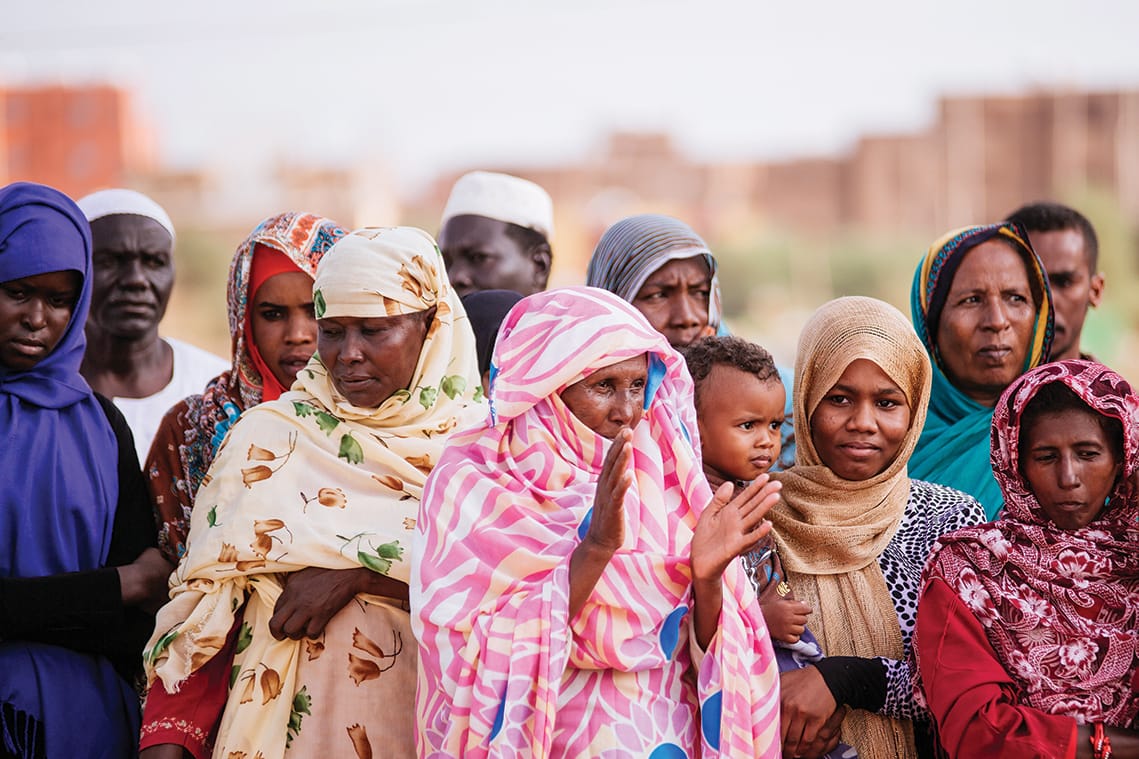 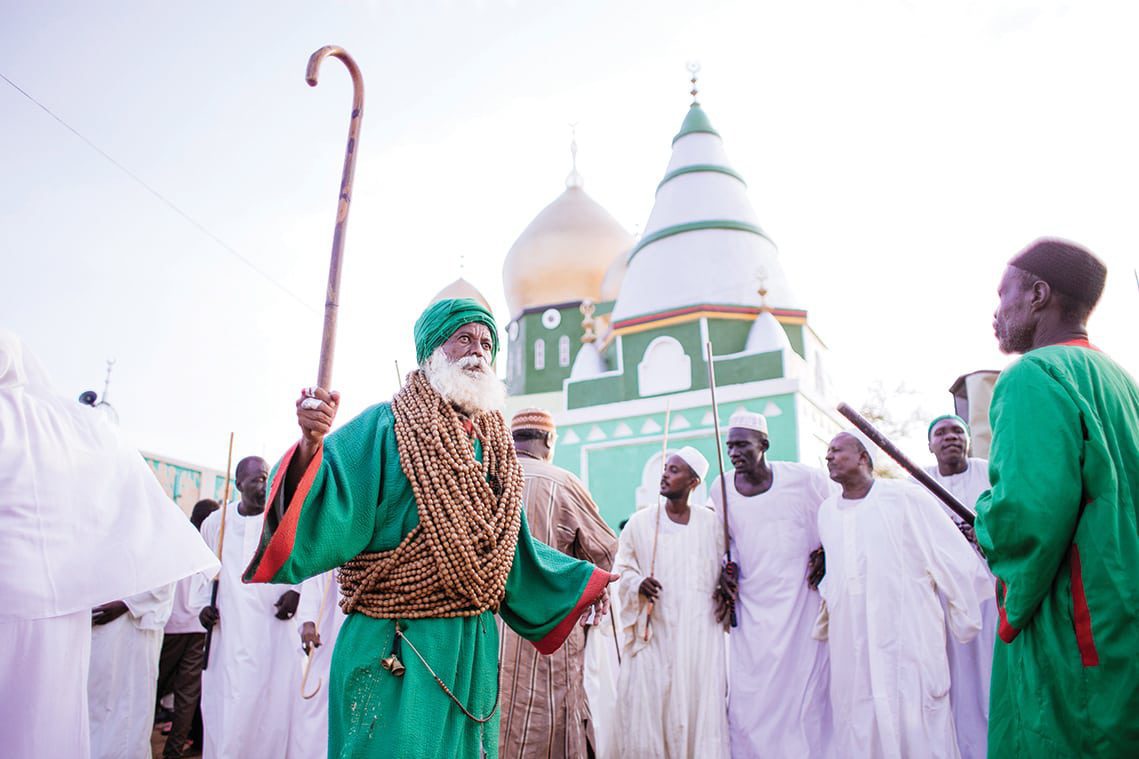 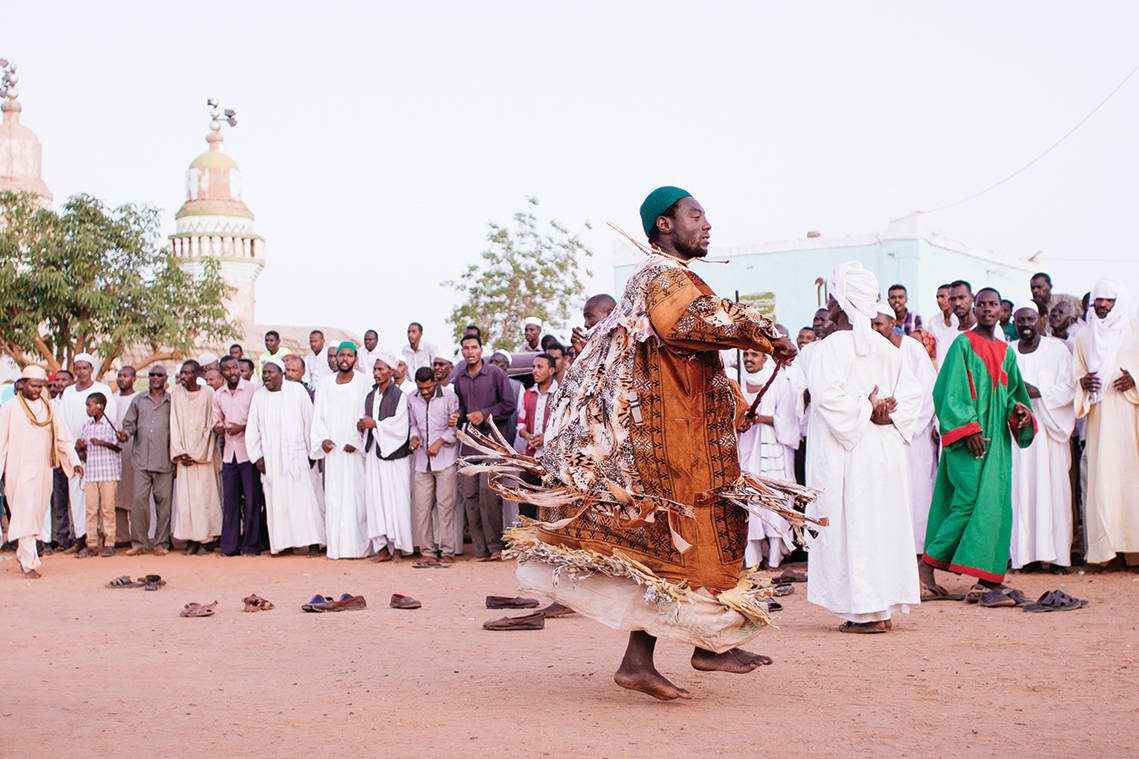 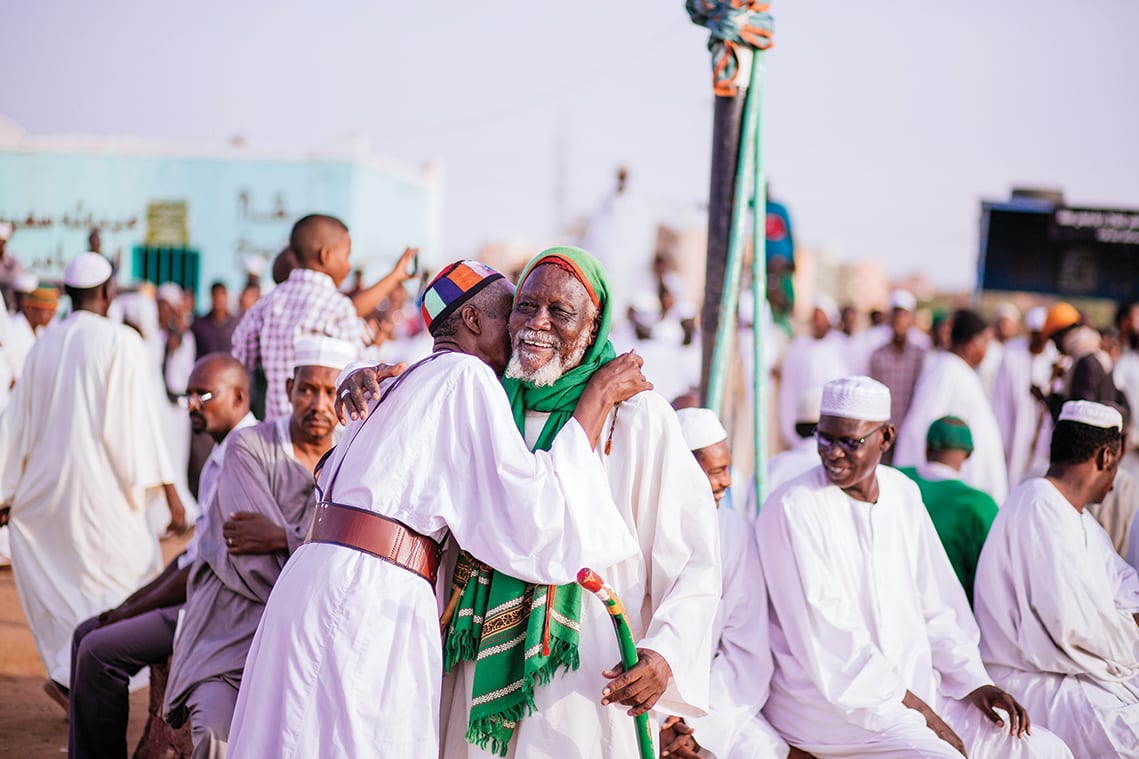 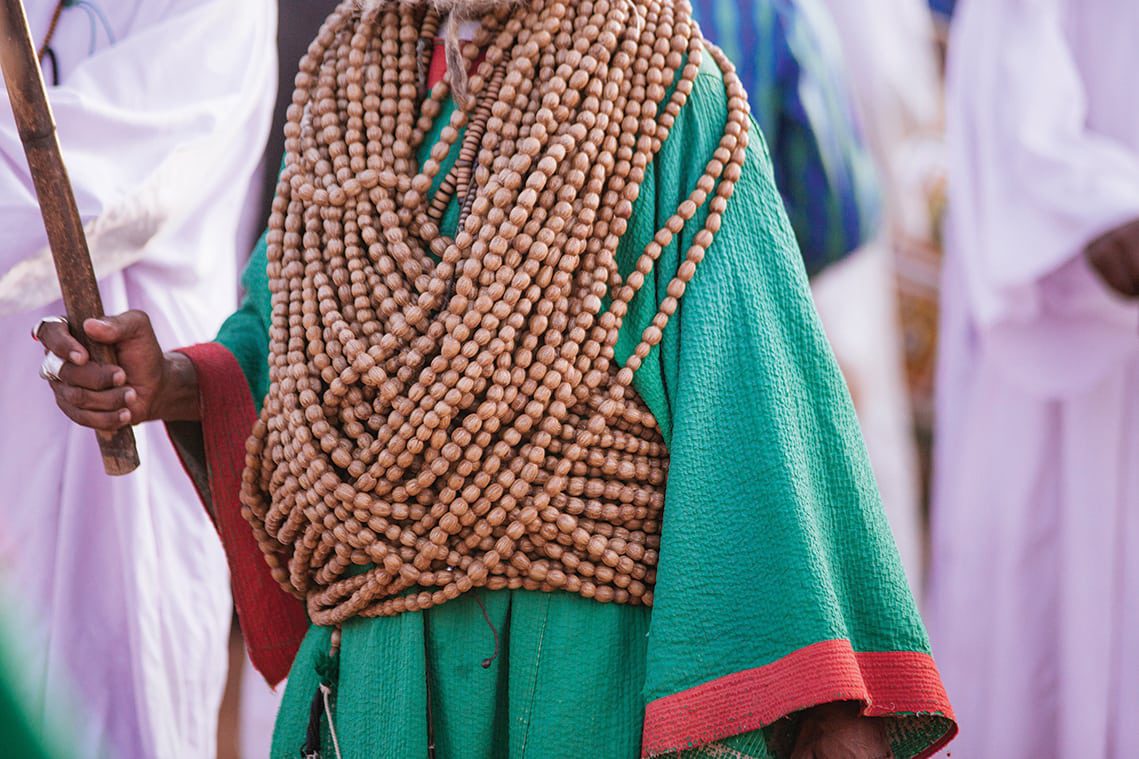 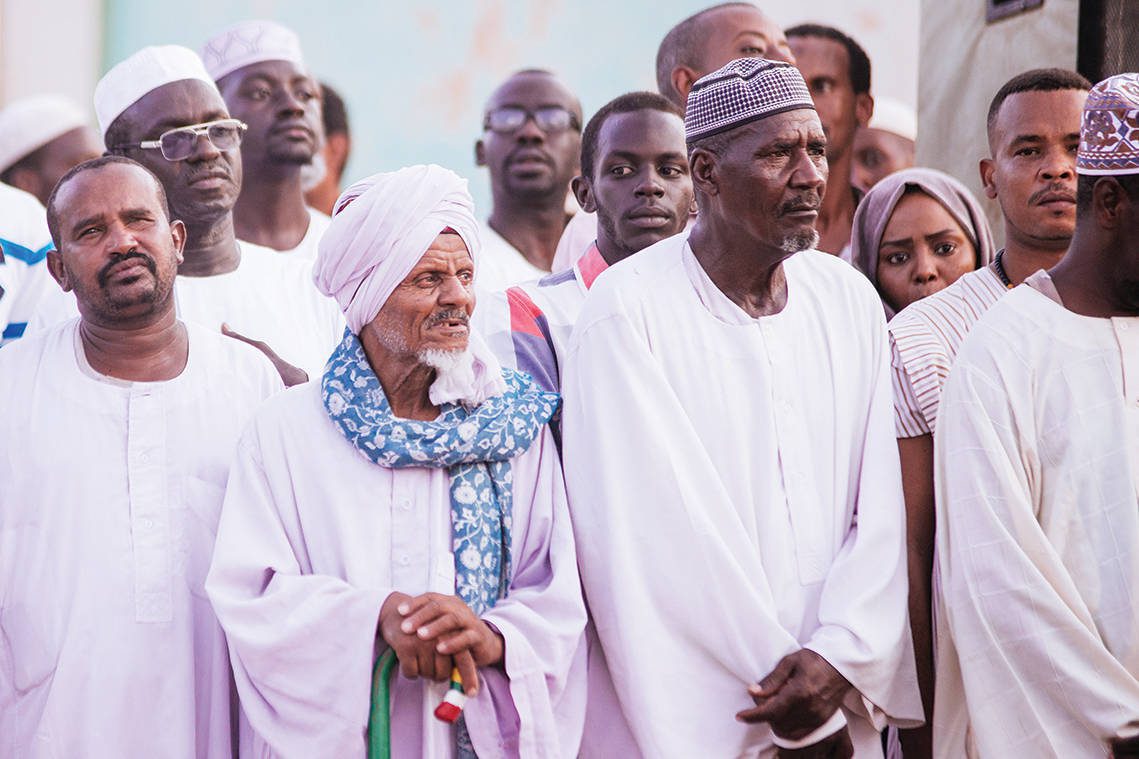 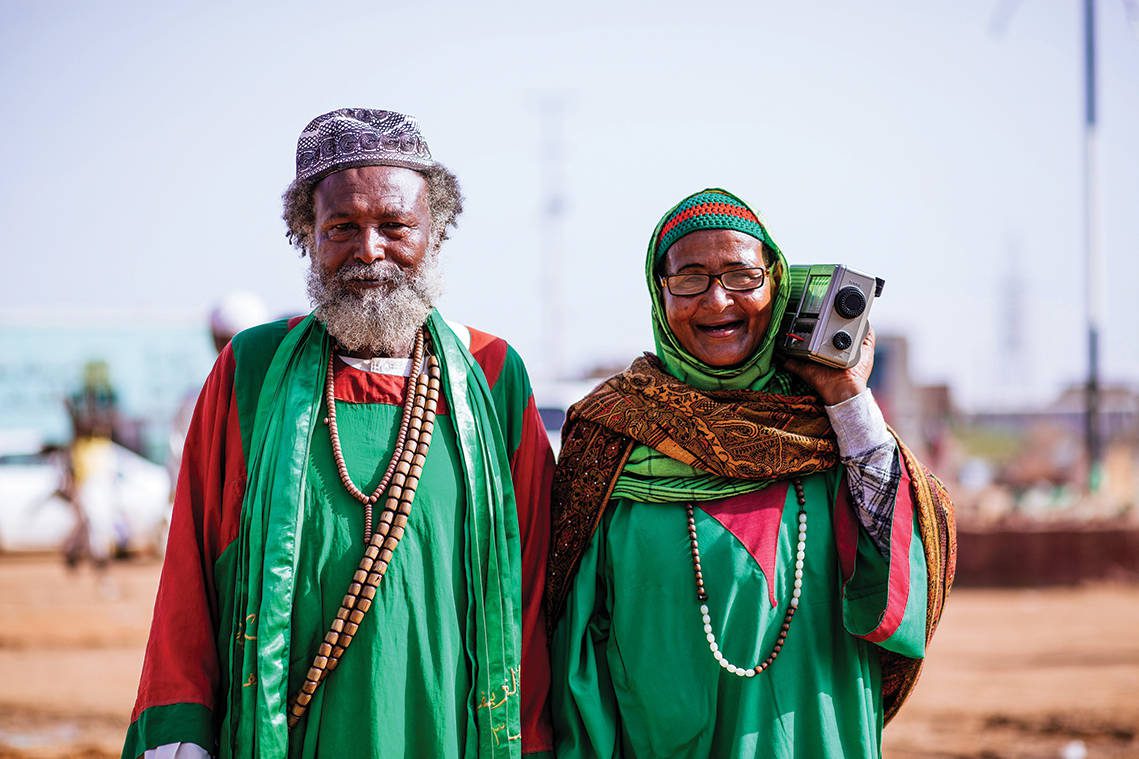 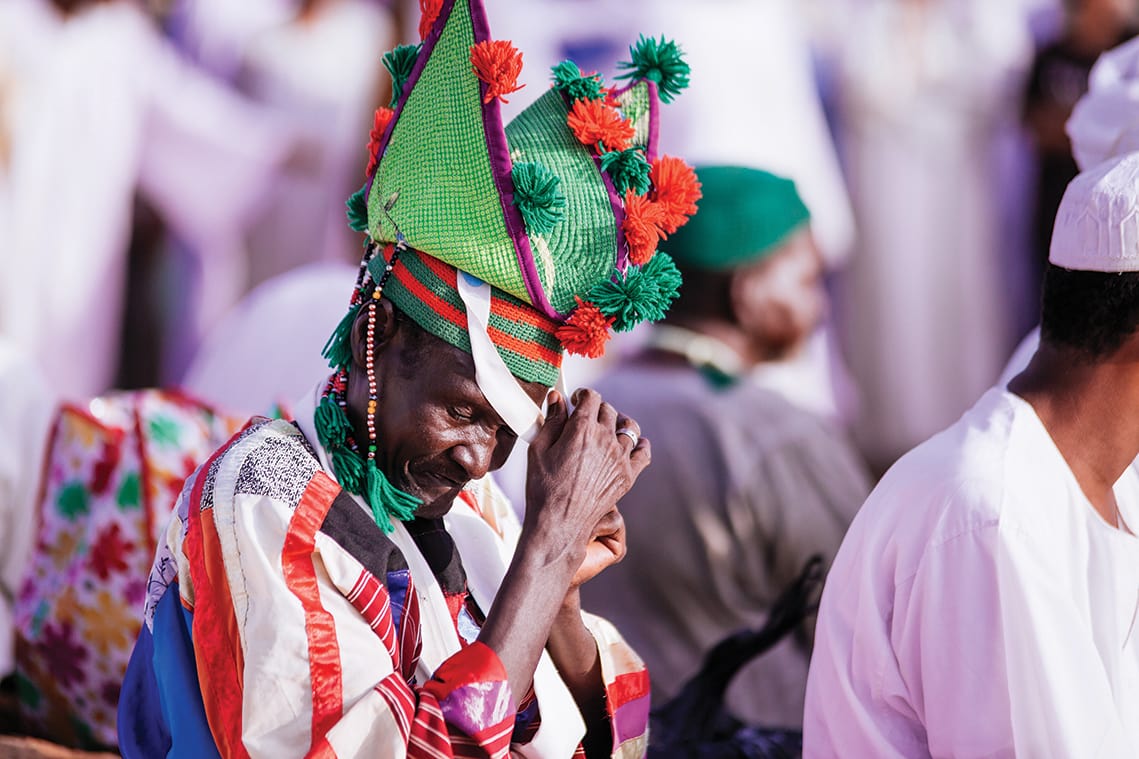 “During dhikr, we fly to the heavens”

Sudanese Sufis make up one of the world’s largest national communities practicing Sufism – a dimension of Islam often seen as ‘mystical’ due to its followers’ pursuit of a personal, inner path to God. The Qadiriyya is just one of several orders, or tariqa, in Sudan. What unites each, however, is the belief that an inner path to God can be found through dhikr – absolute absorption in worship during which prayers, dances and spins may be repeated with enough fervour to induce a trance to overcome the self.

As the sun lowers, a sound system crackles to life with Islamic chants. Women trill zaghareet and men begin to sway backwards and forwards. A large circle forms around a troupe of musicians. ‘I’ll tell you a secret – if you’ll believe me,’ shouts Ahmed Mohamed Alamin, a 30-year old pharmacist, over raucous cymbals and drums. ‘During dhikr, we fly to the heavens.’

The Qadiriyya dhikr begins in earnest upon the arrival of the dervish elders, who pull up to the mosque in a white minibus and proceed ceremoniously into the centre of the circle of worshippers. In stark contrast to the white jalabiya worn by most members of the assembly, the dervish elders distinguish themselves by sporting more brightly coloured and patterned outfits.

‘At midnight, many months ago, I recited the sheikh’s poetry. The same night, I dreamt that he gave me a purple jalabiya. He said to me, “This is a gift so that you can look good during the dhikr.” When I woke up, I found the jalabiya next to my bed. It was new,’ says 60-year old merchant Yassin Hassan on the origins of his purple and silver zebra print jumpsuit, which he accessorises with green epaulettes and a moustache.

After a slow lap or two, the dervish elders begin to splinter from one another. Some stand stock-still to absorb the atmosphere and others begin to twirl slowly on the spot. One man, wearing a leopard print poncho and pant set, approaches his spins with the momentum of a few chassés and raises a horned, black staff into the air while hopping on one foot. Occasionally, he strikes a brisk pose for snap- happy tourists.

The costumes worn by other dervishes range from simple green jalabiyas, trimmed and cuffed with orange hems, to more flamboyant frocks layered with technicolour khirqas, or strips of fabric. Some wear shades while others sport fluorescent sashes embroidered with hadiths. Most dervishes, though, wear garlands of wooden misbaha beads, and a lot of green.

‘As you can see, I’m wearing a beautiful green jalabiya,’ says Amira, an Omdurman housewife known as ‘the daughter of Sheikh Hamed Al Nil’. ‘It was a gift from my sheikh, and looks like the typical great Sufi dresses. It symbolises the simplicity and the calm of Sufism, and its charm and beauty.’ Most cloaks and garments, she says, are bestowed to the dervishes by the order’s sheikh during formal initiation ceremonies. Others, however, like Hassan, refer to a second cloak – a spiritual one – that’s received by ‘spirit-sheikhs’ in dreams and visions.

Apart from the wider significance of the green colour of the Sufis’ jalabiyas and taqiyyahs – symbolic of Prophet Muhammad (PBUH) and, by extension, Islam itself – many Sufi authors have developed systems connecting other colours to specific spiritual experiences, according to John Renard, professor of theological studies at Saint Louis University. Yellow, for example, is associated with faith, red with experiential knowledge, black with ecstasy and green with tranquility.

When worn on particular items of clothing and headgear, green also signifies personal standing within several Sufi orders. ‘This jalabiya and the misbaha that I wear define my rank in the dhikr and the tariqa,’ Amira explains.

‘It’s not free, my brother. It’s not free,’ adds Osaman Sir Elkhatim, a retired police officer. ‘You see, the dress and costume of the devotees define the status of an individual. It’s given by the sheikh to classify your rank in Sufism – how long you’ve served the tariqa. You need to work hard at the dhikr and midnight prayers. The costume reflects your inner soul.’

The patches and rag-like strips of fabric sewn to many of the dervishes’ cloaks, known as muraqqa’a (literally meaning ‘assembled from pieces’), are said to symbolise the asceticism of the dervishes’ lives (the word dervish itself is thought to descend from the ancient Persian Avestan word ‘drigu’, meaning ‘needy’ or ‘mendicant’). Many Sufis, writes Renard, trace the origins of the Sufi cloak to the experience of Prophet Muhammad (PBUH) himself, upon whom God, and later Gabriel, bestowed the cloak of poverty.

Still, there remains a peacockish element to the dhikr today, and shade can be thrown to those in the path of pirouettes. As one dervish elder told Polish anthropologist Maciej Kurcz, ‘The outfit used to be less sophisticated as far as colour and composition is concerned, but today’s fashion is due to their ambition to achieve the greatest originality possible.’

While the sound system continues to reverberate melodic, deep- voiced chants and Qur’anic recitations overhead, a heady spirit of exaltation and collective internalisation takes over the dhikr yard. The drumming crescendos and incense smoke drifts through the air as the crowd sways, claps and shouts with more emotion than rhythm. The dervishes alternate as they intensify their spins, run in bursts and lie curled in the sand.

Though it once lasted a complete 24 hours, the dhikr usually comes to a relatively abrupt stop. The Sufis slap each other on the back and exchange well wishes, before picking their way back through the dry, dusty necropolis of Sheikh Hamed Al Nil mosque toward a fleet of waiting rickshaws. 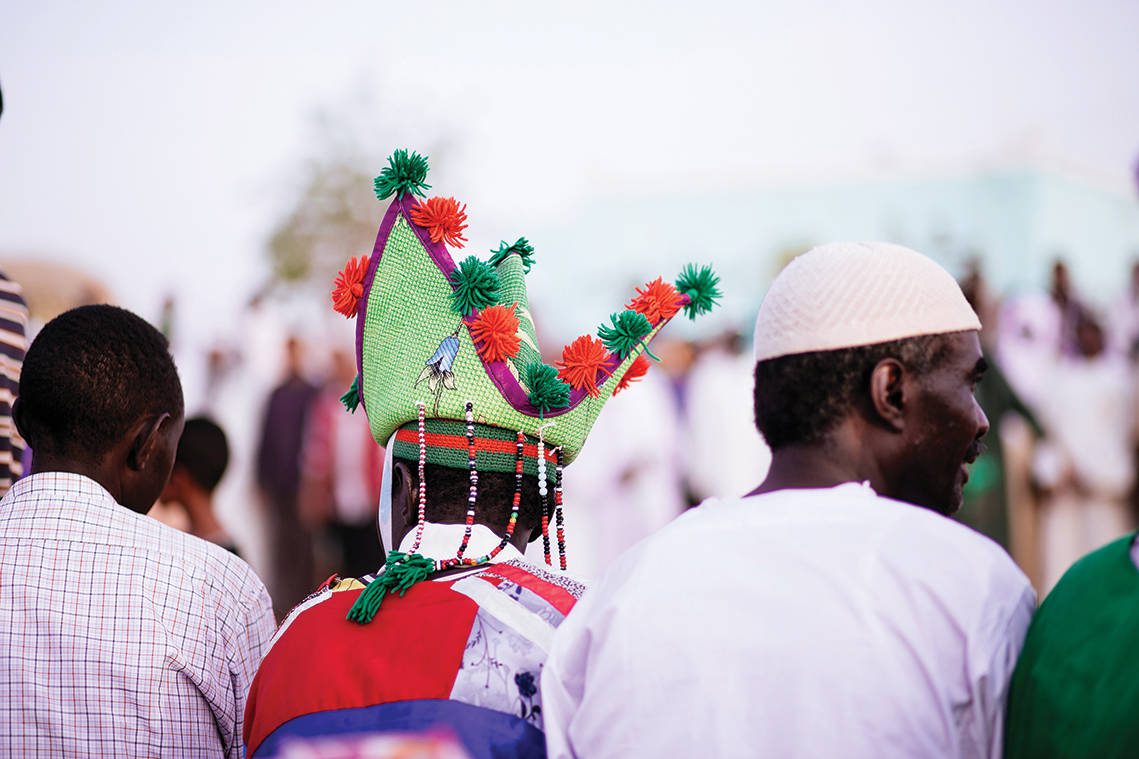 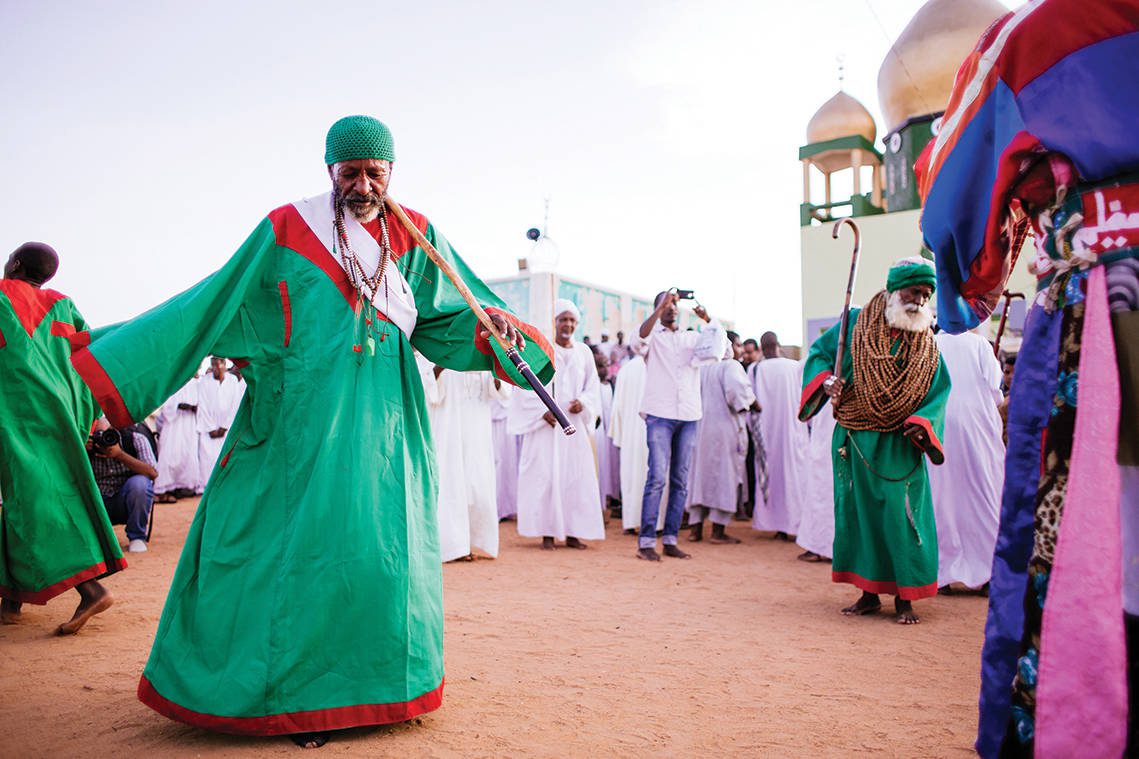 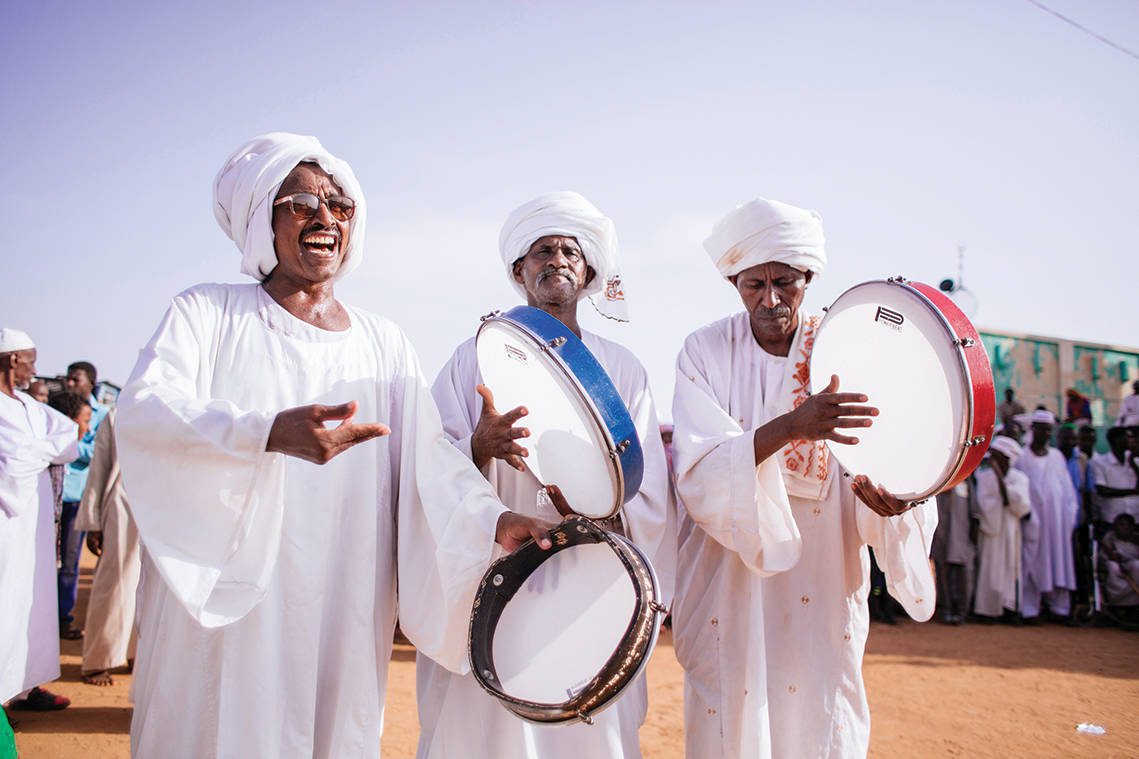 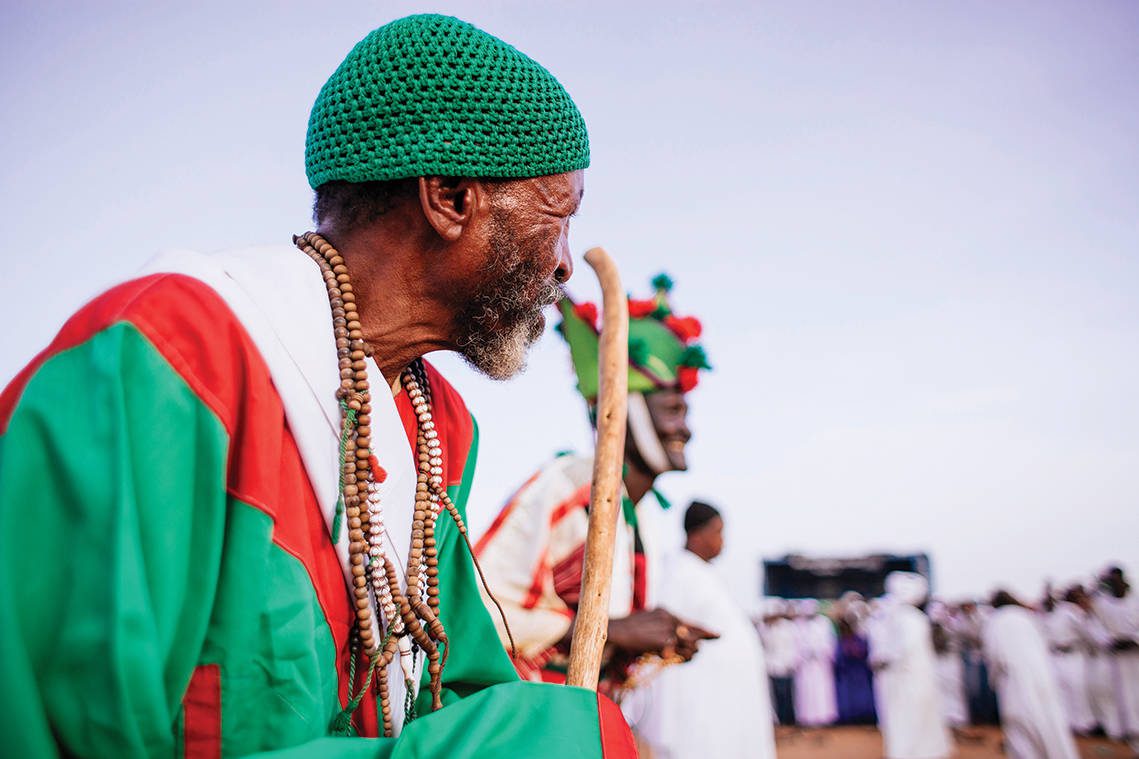 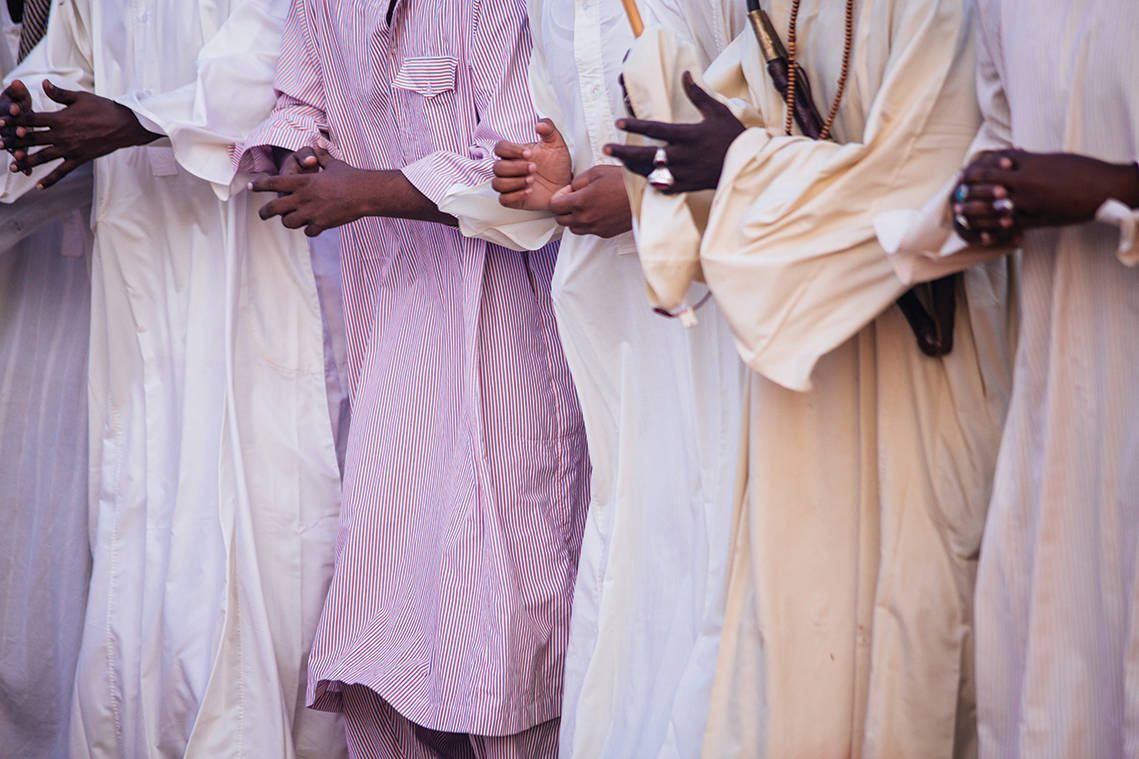 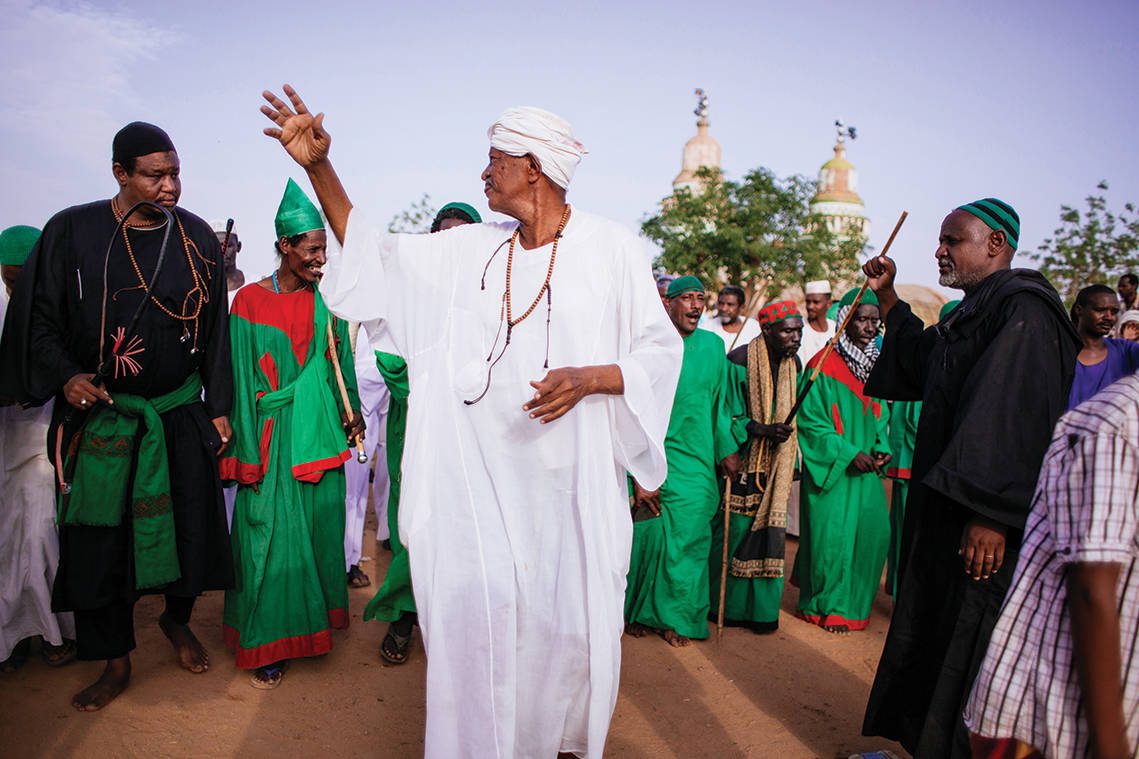 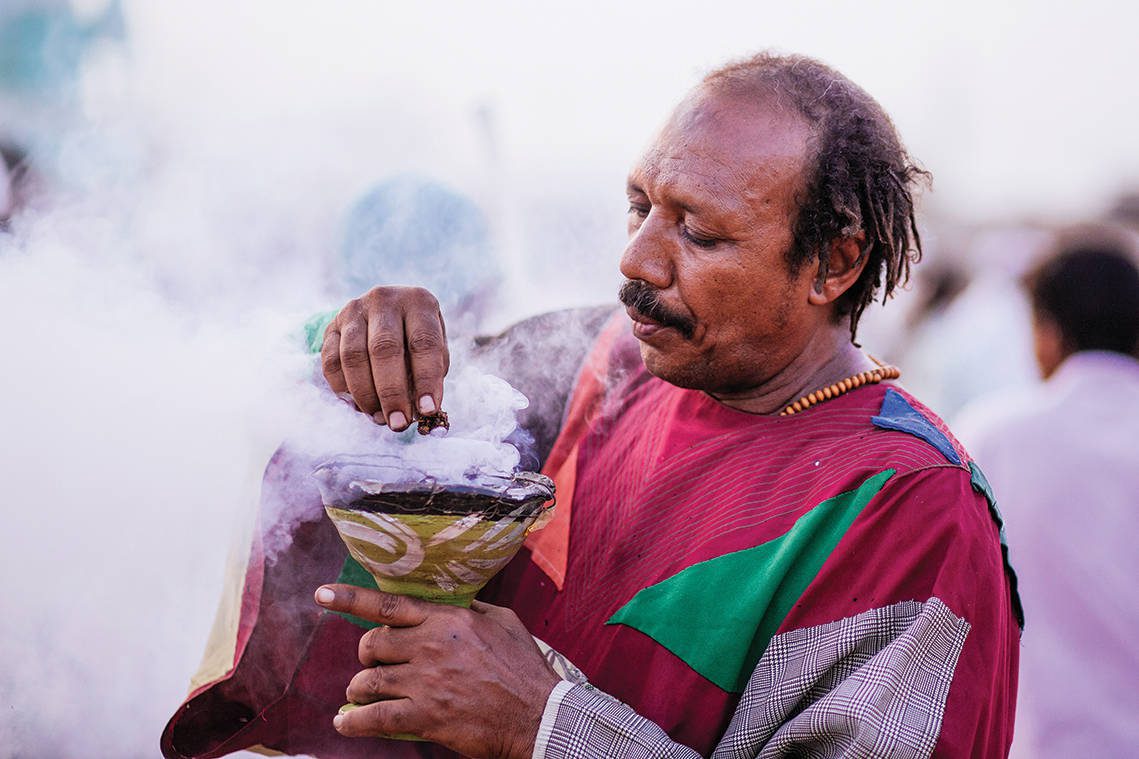 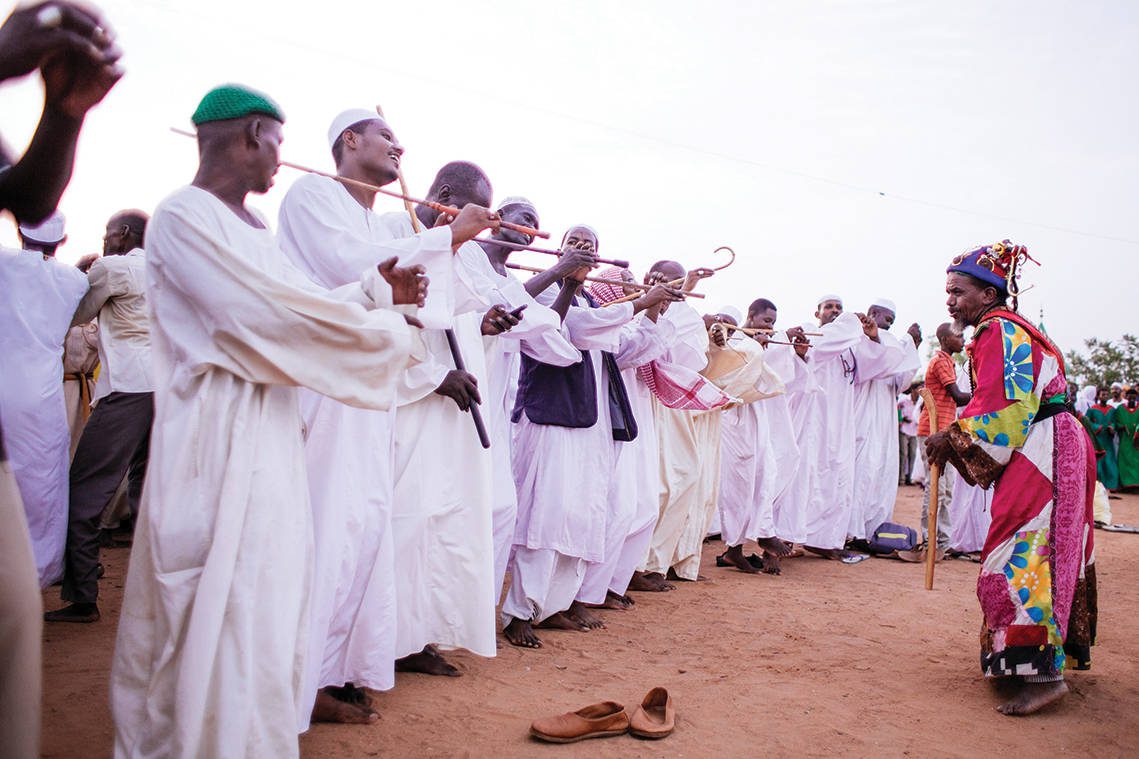 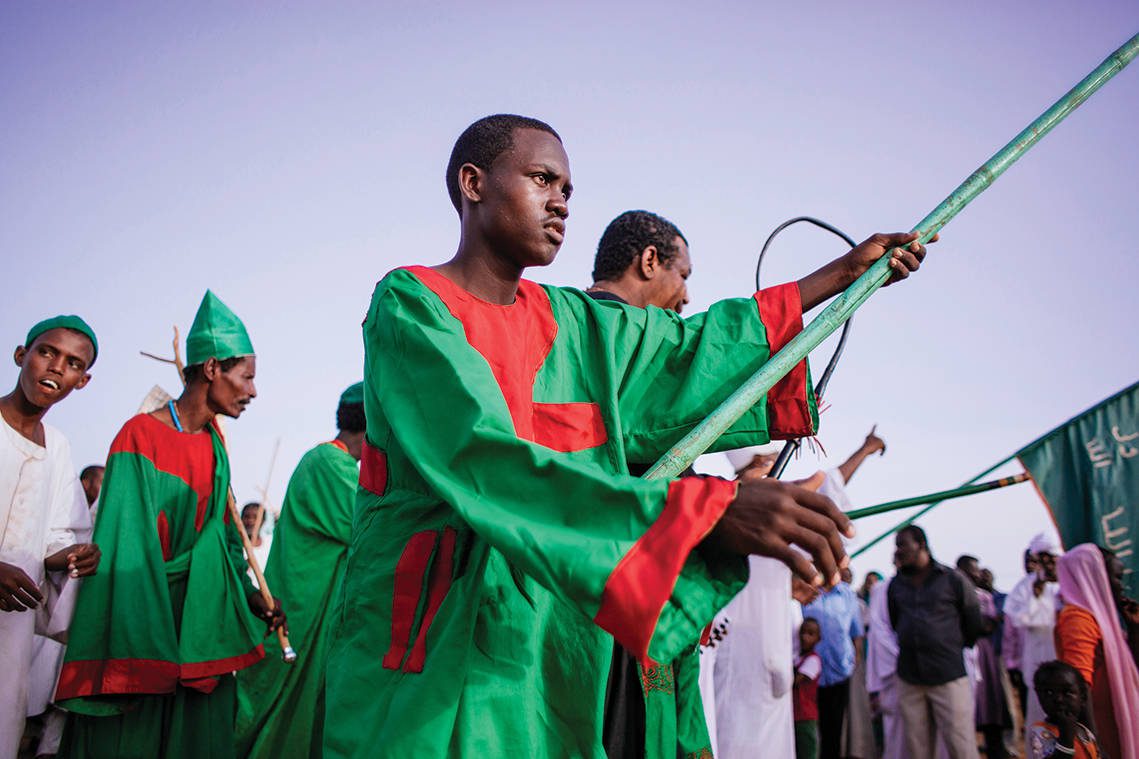 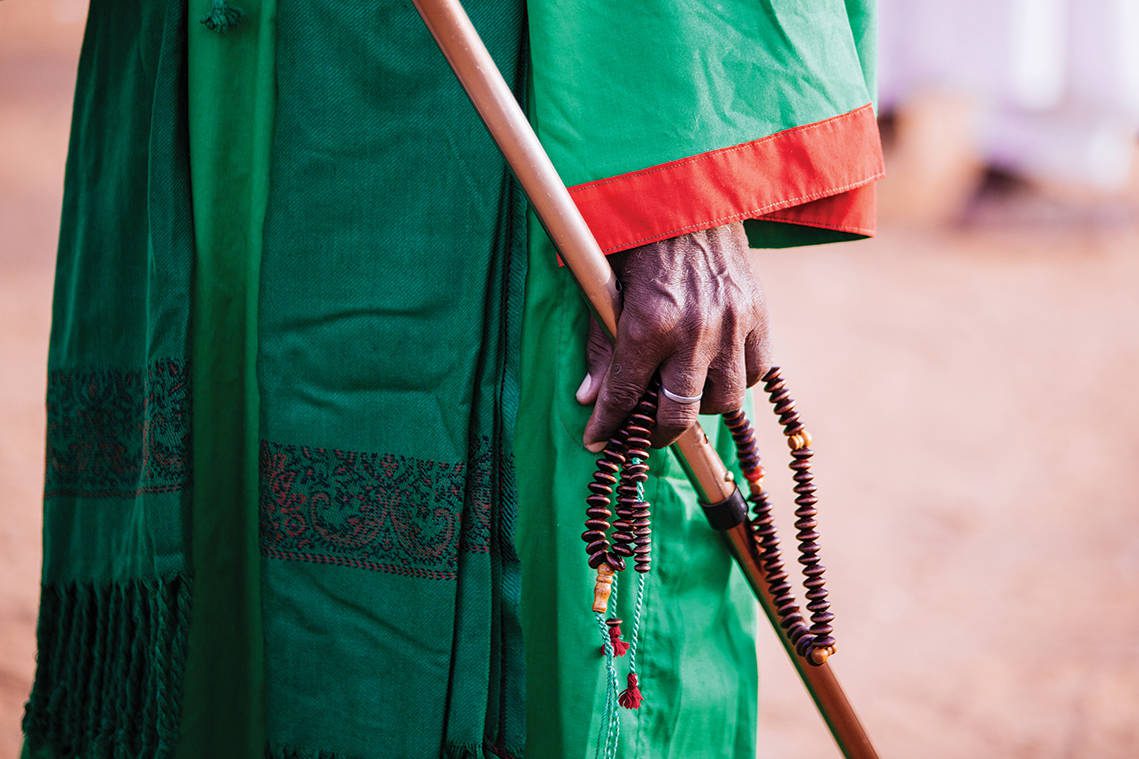 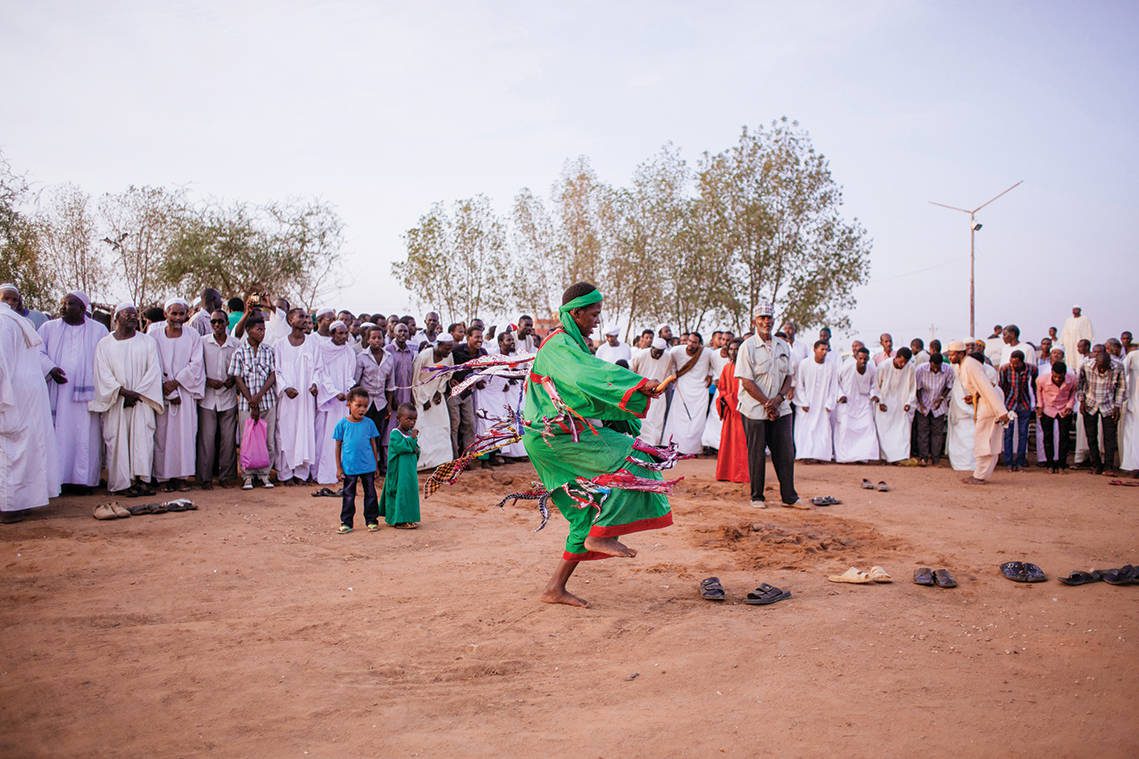 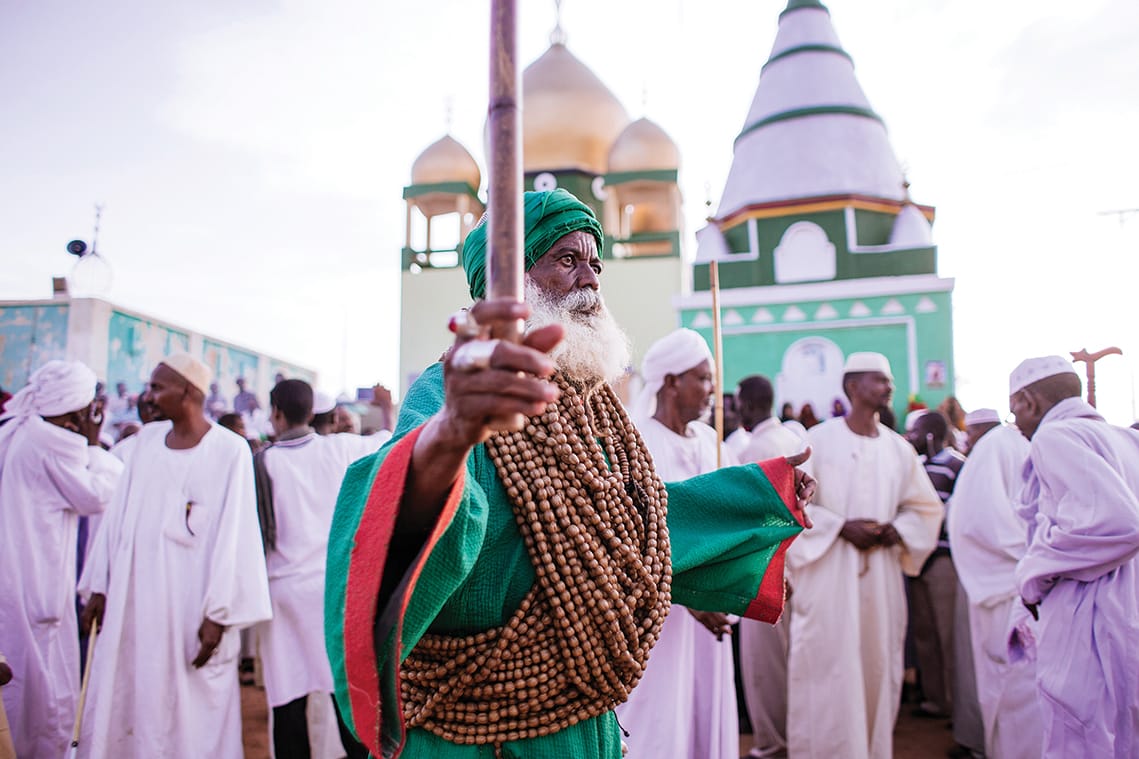 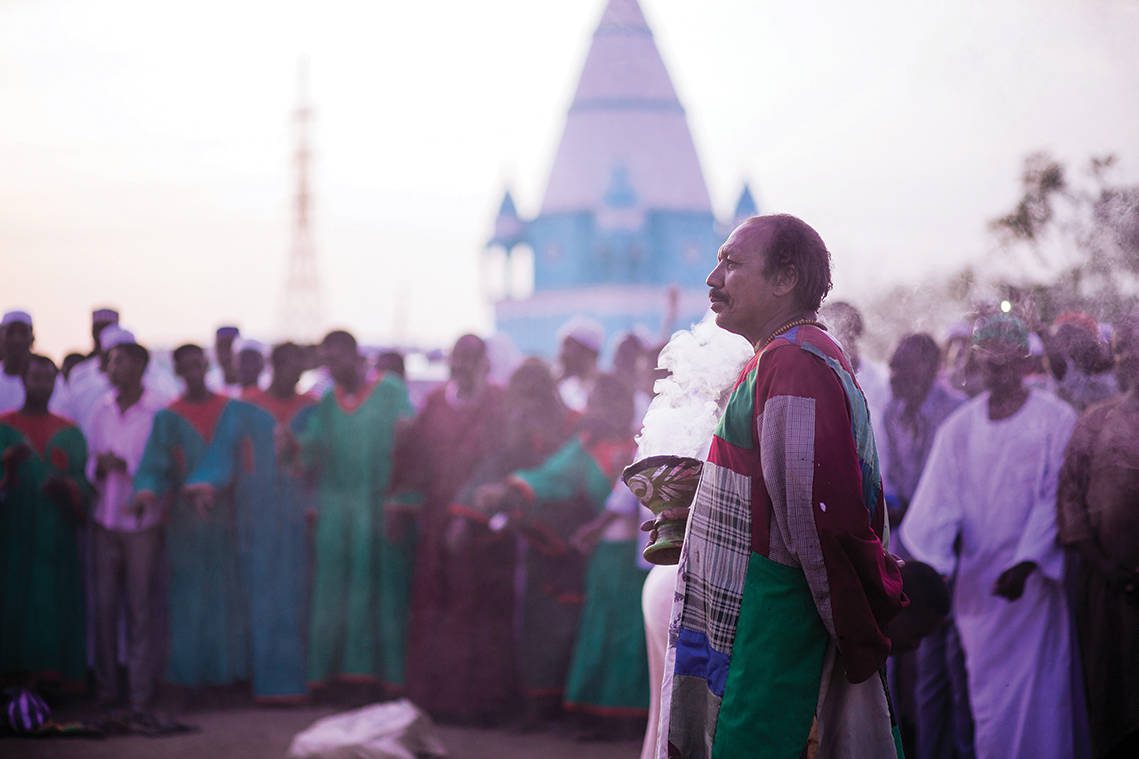 This article appears in the Brownbook’s latest Fashion Directory, Dances of the Middle East and North Africa.

Credit original authors: John Burns and Ibrahim Algrefwi, as well as the photographer Ala Kheir.