A startup that’s been in stealth for about two years is debuting what may end up as the biggest competitor in the smartwatch market. It may give Apple more than a bit of a scare given how much the two technology companies have in common and given what they don’t have in common.

Just take a look at how the San Francisco-based Olio Devices describes itself on its website: “A new, design-focused company with a passion for enriching peoples’ lives through premium products and meaningful connectivity.”

“We thoughtfully blend the highest quality materials with carefully crafted design and considered intelligence for products that are as immediately functional as they are enduring and expressive,” states Olio. “With a passion for detail, simplicity and empowerment, the Olio team works hard to give you freedom of choice in what you wear and time to focus on what matters most to you.”

Simply, Olio is not defining itself as a specific device maker and doesn’t even mention any product. Sounds a bit familiar doesn’t it? If Olio wasn’t mentioned in the description, it could just as well be a write-up of Apple in its early years.

Like the brains behind Apple, Olio founder and president Steven Jacobs isn’t aiming to be just a consumer device maker. He’s aiming to shake things up, to innovate as Apple did with PCs (and then obviously music and smartphones and, a bit more down the road, very likely cars). 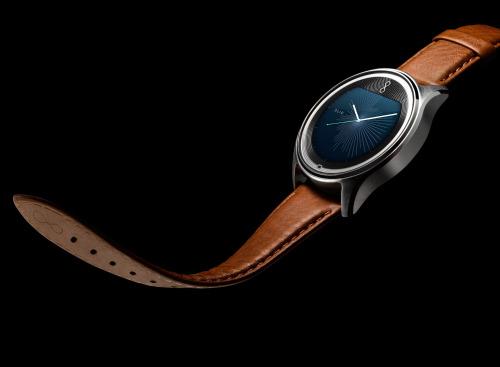 “Olio’s Model One is the antithesis of a mass market product, produced to be everything to everyone. Olio was founded to create thoughtfully crafted products for the discerning individual who wants the latest technology, but on their own terms,” Jacobs said. “What’s more, we understand that the wrist is a very personal, intimate space, and anything you do there needs to have a purpose.”

Olio Devices is launching its first product, a smartwatch called Olio Model One, just weeks before Apple’s much hyped Watch is due to arrive on April 24.

Like Apple, Olio makes its own hardware and software for the Model One, but unlike Apple and most smartwatch makers, Olio has no desire to create a smartwatch tied heavily to apps. In fact, it’s doing its best to avoid apps. Jacobs says there’s a very good reason for the strategy and predicts it’s a path that will be commonplace among mobile device makers down the road, with even Apple changing stride.

In fact, Jacobs says Apple made a big misstep in creating hits impending the Watch in striving to do what it did with its iPhone app ecosystem with its new smartwatch wearable.

“Apple said this was successful on the iPhone, so they’re porting it over,” said Jacobs. “One could say they’re doing that because they’re still trying to find that killer functionality. But the last thing we need is another group of apps on smaller screens.”

“There is no app store,” said Jacobs. “Apps make a lot of sense for phones, but apps don’t make sense for connected devices as a category, let alone the small real estate of something you wear on your wrist. Instead of forcing everybody to download all the same apps as on their phone over again or following the same paradigm that they do on a much larger device, what we do is connect the watch to all the apps and services that are important to you, vis-à-vis with all the apps you already have on your phone.”

The Olio smartwatch, unlike the Apple Watch, will work with both Apple iOS devices and Android smartphones. Pricing is in the realm of Apple’s Watch options, ranging from $595 up to $745. The Model One will start shipping in the summer.

“We’re not looking to be a huge brand that makes something for everyone but rather like a local brewery or coffee shop that makes quality products you enjoy,” said Jacobs. “Not everybody likes IPAs but for those who do, there’s this one out there that they can really feel like they’re a part of. That’s what we are.” Sounds familiar doesn’t it?