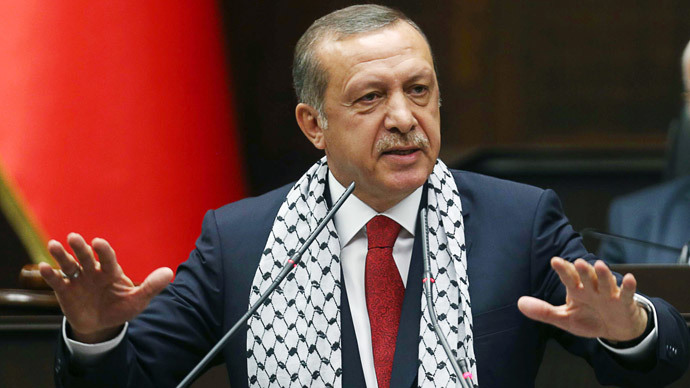 In a televised speech in Istanbul, Turkish President Recep Tayyip Erdogan claimed that Muslims had discovered the Americas three centuries before the voyages of Christopher Columbus. He was addressing a summit of Muslim leaders from Latin America.

“Contacts between Latin America and Islam date back to the 12th century. Muslims discovered America in 1178, not Christopher Columbus,” Erdogan said. “Muslim sailors arrived in America from 1178. Columbus mentioned the existence of a mosque on a hill on the Cuban coast.”

Erdogan is not shy of making provocative statements, whether it’s about his political rivals, ethnic minorities or social media Web sites. His latest remarks are, in comparison, less incendiary.

They echo the research of a small coterie of scholars who believe there’s archaeological and documentary evidence of Muslims in pre-Columbian America. Erdogan is apparently citing the disputed work of Youssef Mroueh, an academic affiliated with the As-Sunnah Foundation of America.

In a 1996 paper, Mroueh referred to the presence of a mosque spotted by Columbus along the Cuban coast. “Columbus admitted in his papers that on Monday, October 21, 1492 CE while his ship was sailing near Gibara on the north-east coast of Cuba, he saw a mosque on top of a beautiful mountain,” writes Mroueh.

Most scholars insist the “mosque” mentioned was a metaphorical allusion to a striking land feature. There have been no archaeological discoveries of Islamic structures pre-dating Columbus’s arrival in the New World.

Mroueh, who is not listed as a historian at any institution of higher learning, suggests that explorers from Muslim kingdoms in West Africa made the same journey across the Atlantic from the Canary Islands well before the Italian seafarer did in the employ of the Spanish Crown.

Others cite the work of a noted geographer in Muslim Spain, who produced a map in the 10th century that may show the outline of South America, and referenced the journey of an Arab sailor who traveled westward through an “ocean of darkness and fog.”

It should go without saying that the first peoples to “discover” the Americas were the ancestors of the continents’ indigenous population.

But there is all sorts of speculation of other peoples in other eras finding the Americas long before Columbus. Did Polynesians rowing catamarans make it to the American Pacific coast? What about the great treasure fleets of the Chinese Ming emperor? Or Basque fishermen, chasing streams of Atlantic cod?

The most established narrative of pre-Columbian encounter involves explorers and settlers from Scandinavia, who arrived on the shores of Newfoundland and Canada some five centuries before the Spanish expedition of 1492.

Yet Erdogan’s insistence upon the presence of Muslims in the New World is worth taking into consideration, if not for the reasons that he would intend.

The Spanish exploration and colonization of the Americas followed the bloody battles of the Reconquista — the Catholic campaigns against the last Muslim states on the Iberian peninsula. Many of the Spanish soldiers and officers who crossed the Atlantic were animated by the zeal of the Spanish Inquisition, and in some accounts refer to the indigenous populations they encounter as “moors” and “infidels” and their ziggurats as “mosques.” The profusion of towns in Mexico called “Matamoros” — death to the Moors, a name associated with a mythic Christian saint who battled Muslims  — speaks of that legacy.

Apart from the Arabs and converted Muslims aboard Spanish ships, Islam may not have been present in the New World. But it still haunted the imagination of Europeans as they ventured into the alien unknown.