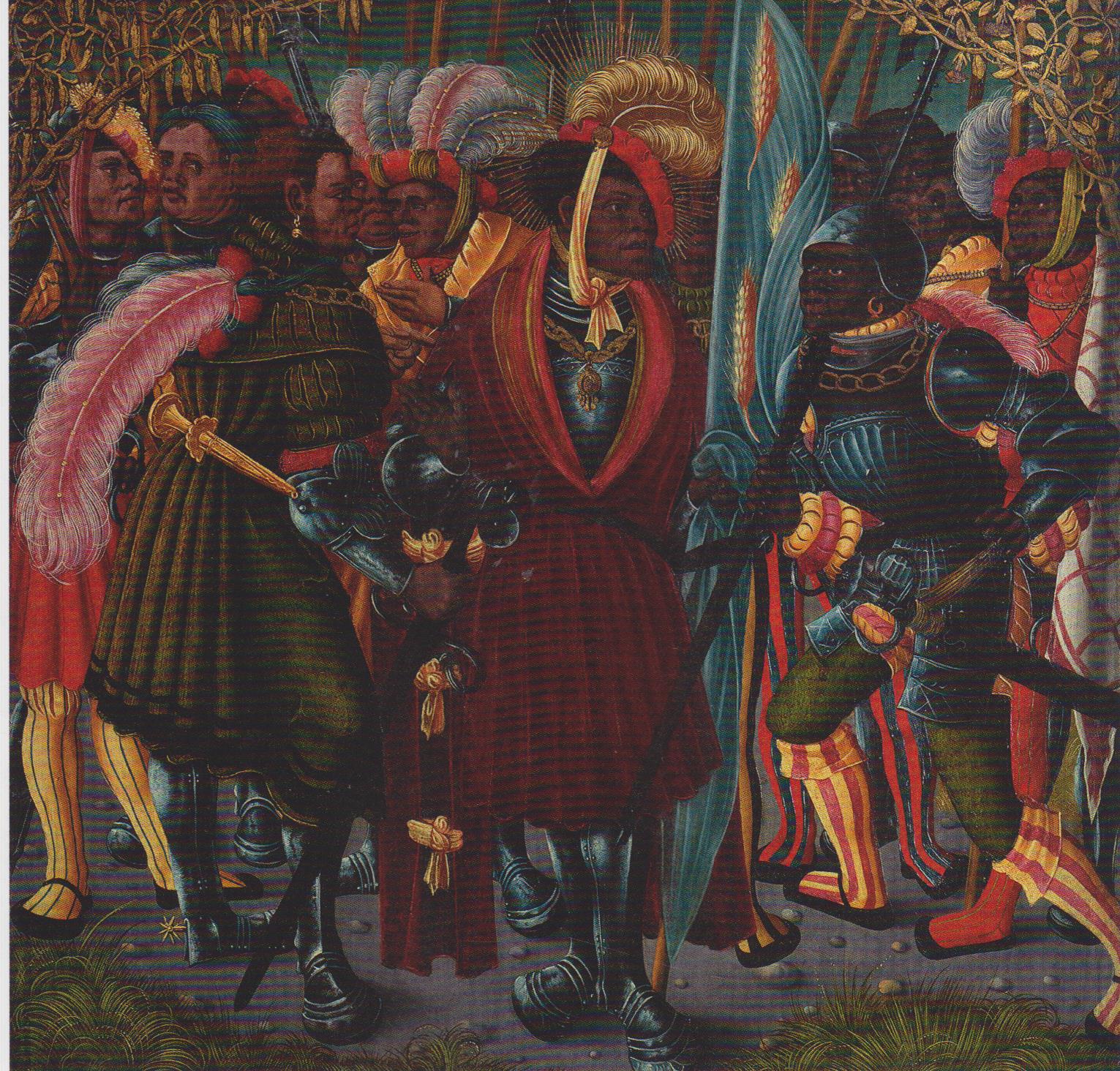 Elizabeth I was, as we all know, a monarch of many names: Elizabeth Tudor was also Good Queen Bess, Gloriana, the Virgin Queen and occasionally something much more exotic:

‘the Sultana Isabel, who has status and majestic glory, firmness and stability, a rank which all her co-religionists, far and near, recognise, whose status among the Christian people continues to be mighty and elevated’

The Sultana Isabel is of course Queen Elizabeth seen from far away, seen in fact, from Africa in 1600, and that flattering description of her majestic glory, firmness and stability was given by one of her new allies on the world stage, Sharif Ahmad al-Mansur, the wealthy king of Morocco, far richer than Elizabeth herself and a political force to be reckoned with in both the Mediterranean and the Atlantic.

Sharif Al-Mansur’s comment on their Queen is a reminder that English playgoers in Shakespeare’s time were global citizens, proud of Francis Drake’s circumnavigation of the earth and willing listeners to the tall stories told by travellers – stories like the ones Othello tells, of lands filled with ‘cannibals that each other eat, the Anthropophagi and men whose heads do grow beneath their shoulders’.

England’s responses to this shifting expanding world were played out in the theatre. In The Merchant of Venice, a richly dressed, exotic figure sweeps on to the stage to woo the Italian heiress, Portia.

Morocco: Mislike me not for my complexion, The shadowed livery of the burnished sun, To whom I am a neighbour and near bred. (Merchant of Venice 2.1.1-3)

This eloquent man burnished by the sun is a Moroccan prince, and he is the first of Shakespeare’s noble Moors. Even more striking than his skin colour is that this man whom Portia calls a ‘gentle’ Moor is entirely familiar with the details of our currency.

Morocco: They have in England A coin that bears the figure of an angel Stamped in gold (Merchant of Venice 2.7.55-7). Shakespeare reassuringly suggests that even if the English know little of Morocco, this sympathetic prince already knows a great deal about England and in particular about its coins.

Nobody watching The Merchant of Venice would been the least bit surprised that the prince of Morocco, asked to choose one of the three caskets, went for gold. Morocco was, as everybody knew, quite simply the place where gold came from and Sharif al-Mansur controlled access to the huge reserves of West Africa. From Timbuktu alone he took 600 kilos of gold a year, and so, predictably, he was dubbed ‘al-dhahabi’, the Golden One. It was reported that ‘1400 hammers continuously struck coins at his palace gate.’ That’s clearly an exaggeration, but nonetheless you can practically hear the sound of Al-Mansur’s money being minted.

I am holding one of his coins now. It’s almost exactly the same size as a 2p piece, although it’s thinner, and it’s made of solid gold. Both sides are covered with beautifully calligraphed Arabic script: ‘in the name of God, the Merciful, the Compassionate,’ the central panel begins, then describing Al-Mansur as ‘Commander of the Faithful’.

The coin tells us both the place and Islamic year of its issue: ‘struck in the city of Marrakesh, may God protect it, in the year one thousand and eight.’ That is the year we call 1600 and The Merchant of Venice had been playing for about 5 years.

Morocco mattered. It had horses, sugar, gunpowder and gold. In 1585 London merchants had established the Barbary Company to trade with North Africa and ships sailed from here on the Thames to Morocco. But for a long time, Morocco was far more important to England than the other way around, after all pretty well every gold coin circulating in England was made of West African gold. Sharif al-Mansur began to take England seriously only after the defeat of the Spanish Armada in 1588. Morocco, like England, was in a state of more or less permanent war with Spain, so this new assertive England emerged as a useful, desirable ally. To celebrate, the Sharif encouraged English residents in Morocco to light festive bonfires to mark Elizabeth’s victory over the Spanish fleet.

To foster this new alliance, Al-Mansur sent a series of ambassadors to England. They were a great spectacle, particularly the lavish processions through the streets of London of the Moroccan ambassador in 1600. For many Londoners, this was their first glimpse not just of Africa, but of Islam. Professor Kate Lowe:

‘That 1600 embassy, I think, is the first time that lots of Londoners saw Muslims in a group behaving as Muslims and I think that must have been an enormous impetus to actually understand slightly more. I think there is a difference between what is the official foreign policy line at Court because at Court these were allies against Spain. So at Court there was an acceptance of them, probably in a way that the people in the street weren’t seeing it.’

The street was a great deal less friendly, and treatment of Moors in England could be actively hostile. In 1595, the English and Moroccan forces together rescued North African galley-slaves from Spanish ships. Some were sent home to Morocco, others were permitted to come here to England. But despite the queen’s interest in protecting her Moorish allies, Londoners protested and the Moors eventually had to be expelled.

‘The word Moor sounds impressive, but it actually signifies very little. Originally it was the classical word that came from somebody who lived in Mauritania, the Roman province across the top of North Africa. After that it gained other meanings, one of which was black. It also then gained the meaning of a Muslim, but when it is used in Elizabethan England it is just imprecise. I honestly think that is one of the reasons why that term `the Moor’ is used, it has resonance but actually not much substance, and you can then hang so much off it.’

One of the things you could easily hang off it was that xenophobic hostility that had forced Elizabeth to expel the Moroccan galley-slaves. Shakespeare doesn’t shy away from this kind of racist antagonism. Not for the first time, he explores what is a very London phenomenon in Venice.

The villain Iago, as well as the angry father of Desdemona, Othello’s white Venetian bride (indeed anyone hostile to Othello) uses racial insults against the Moor: ‘barbarian’, ‘sooty’, ‘thicklips’. They still shock us today, as they were surely meant to shock then. Here is Iago telling Desdemona’s father that his daughter has eloped with Othello:

Iago: Even now, now, very now, an old black ram Is tupping your white ewe. Arise, arise, Awake the snorting citizens with the bell, Or else the devil will make a grandsire of you. (Othello 1.1.89-92) 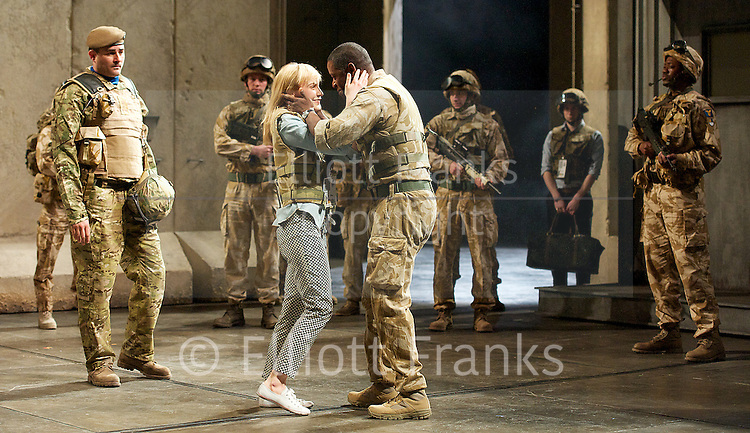 For Iago, Othello is not just black, his blackness is of the devil. Yet for all the times he is associated with darkness, Othello is also praised. The general is ‘brave’, ‘noble’, ‘valiant’. The blacker his antagonists paint him, the more Shakespeare forces us to acknowledge Othello’s honour.

Desdemona falls for Othello as he’s telling exotic stories of his African youth:

Othello: Wherein I spake of most disastrous chances . . .Of being taken by the insolent foe, And sold to slavery (Othello 1.3.133-7)

Othello the great and valiant leader was once himself a slave, sold after being taken prisoner. The Mediterranean was a dangerous place of warfare, piracy, slavery and shipwreck, as the ships of the different sea-faring powers fought for supremacy. And one of these ships, passing from Morocco to northern Europe, carried the coin that we’ve been looking at.

For the gold coin of Sharif al-Mansur that I’m holding here in the British Museum was found not in Morocco, but 12 miles off the coast of Devon. It was one of an astonishing hoard of 450 Moroccan gold coins found in Salcombe Bay in 1994. Marine archaeologists uncovered an amazing treasure on the seabed: heaps of 16th-century coins, gold ingots, earrings and pendants all from Morocco.

Some of the Salcombe Bay treasure is in front of me now, but apart from the coins, it’s hard to tell exactly what the many different pieces are. The mass of 400-year-old Moroccan jewellery is now mostly in fragments, nothing is complete. These are not jeweller’s goods sent for sale they’re chopped-up bullion, bits of gold intended to be melted down and reused. But the gold coins give us important information. Their inscriptions tell us that they were struck by several members of the dynasty that ruled Morocco and the latest that we can date ruled until 1636. So the shipwreck probably occurred shortly after that.

Was the ship that sank off Salcombe Bay a trading ship on the way home from north Africa? Or was it perhaps a pirate ship? We know there were a lot of these around, both English and Moroccan. Barbary pirates took captives from ships on the high seas and from fishing vessels close to the coast. Now and then they even raided the mainland, sometimes literally dragging people from their beds, either enslaving them or holding them to ransom. In 1584, ships from Guernsey, Plymouth, Southampton and London were all taken and their crews enslaved. In 1631, 107 men, women and children were taken in Ireland, 20% of these vanished – they either died or were converted, before they could be ransomed and brought home.

When we hear that Hamlet’s ship has been captured by pirates, we now tend to think more of Long John Silver rather than anything more sinister. But for Shakespeare’s audience pirates were much closer to murdering hijackers. And if crossing from Denmark to England was not exactly like sailing off the coast of Somalia today, pirates off the coast of England were nonetheless a frightening and a much publicised possibility. But Kate Lowe thinks that the Salcombe treasure is unlikely to have been pirate gold.

‘I think it is far more likely to be trade. Morocco and England were only in contact because they were both united by being enemies of Spain. The English are sending timber so they can build ships to fight against Spain, they are sending cannon balls, they are sending guns and the Moroccans are sending saltpetre to make gunpowder.’ And this is the most likely explanation of why the Moroccan gold was being shipped to England:

‘I think they were probably trading in arms and they hadn’t got much that the English wanted so they probably had to pay in bullion and that is why some of it is broken up, it is just bits of jewellery and whatever to get the requisite thing to buy the arms I think.’

Whatever its precise history, the Salcombe treasure is evidence that England, like every other part of Europe, was now in economic, political and military terms unquestionably part of a global system. And Venice was one of its nerve centres. It’s a striking fact that in Othello, the characters speak over thirty times of the ‘world’. Iago is typical, boasting how he has poisoned Othello’s mind:

Iago: Nor all the drowsy syrups of the world,

Shall ever medicine thee to that sweet sleep

The Salcombe Bay treasure was a part of this new world exchange and its gold coins show that Othello is much closer to Elizabethan life than we often think. Like Shylock or Cleopatra, Othello is not the distant outsider but an example of the many encounters between the English and Africans, Arabs and others. A surprisingly large number of people would have thought of Good Queen Bess as the Sultana Isabel.

In the next programme we’re still in the world of adventure, not with pirates but with secret agents.

Shakespeare quotations are taken from: