Take a look at this picture. Do you know who it is?

Most people haven’t heard of him.

But you should have. When you see his face or hear his name you should get as sick in your stomach as when you read about Mussolini or Hitler or see one of their pictures. You see, he killed over 10 million people in the Congo.

His name is King Leopold II of Belgium.

He “owned” the Congo during his reign as the constitutional monarch of Belgium. After several failed colonial attempts in Asia and Africa, he settled on the Congo. He “bought” it and enslaved its people, turning the entire country into his own personal slave plantation. He disguised his business transactions as “philanthropic” and “scientific” efforts under the banner of the International African Society. He used their enslaved labor to extract Congolese resources and services. His reign was enforced through work camps, body mutilations, executions, torture, and his private army. 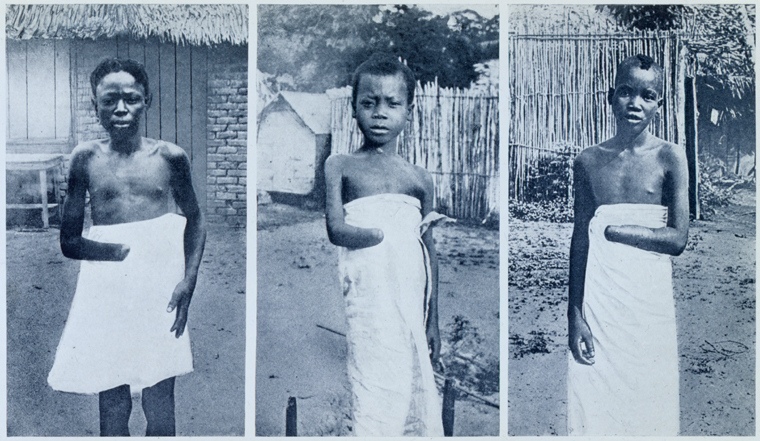 Most of us – I don’t yet know an approximate percentage but I fear its extremely high – aren’t taught about him in school. We don’t hear about him in the media. He’s not part of the widely repeated narrative of oppression (which includes things like the Holocaust during World War II). He’s part of a long history of colonialism, imperialism, slavery and genocide in Africa that would clash with the social construction of the white supremacist narrative in our schools. It doesn’t fit neatly into a capitalist curriculum. Making overtly racist remarks is (sometimes) frowned upon in polite society, but it’s quite fine not to talk about genocides in Africa perpetrated by European capitalist monarchs.

Mark Twain wrote a satire about Leopold called “King Leopold’s soliloquy; a defense of his Congo rule“, where he mocked the King’s defense of his reign of terror, largely through Leopold’s own words. It’s 49 pages long. Mark Twain is a popular author for American public schools. But like most political authors, we will often read some of their least political writings or read them without learning why the author wrote them (Orwell’s Animal Farm for example serves to re-inforce American anti-Socialist propaganda, but Orwell was an anti-capitalist revolutionary of a different kind – this is never pointed out). We can read about Huck Finn and Tom Sawyer, but King Leopold’s Soliloquy isn’t on the reading list. This isn’t by accident. Reading lists are created by boards of education in order to prepare students to follow orders and endure boredom well. From the point of view of the Education Department, Africans have no history. When we learn about Africa, we learn about a caricaturized Egypt, about the HIV epidemic (but never its causes), about the surface level effects of the slave trade, and maybe about South African Apartheid (which of course now is long, long over). We also see lots of pictures of starving children on Christian Ministry commercials, we see safaris on animal shows, and we see pictures of deserts in films and movies. But we don’t learn about the Great African War or Leopold’s Reign of Terror during the Congolese Genocide. Nor do we learn about what the United States has done in Iraq and Afghanistan, potentially killing in upwards of 5-7 million people from bombs, sanctions, disease and starvation. Body counts are important. And we don’t count Afghans, Iraqis, or Congolese.

There’s a Wikipedia page called “Genocides in History”. The Congolese Genocide isn’t included. The Congo is mentioned though. What’s now called the Democratic Republic of the Congo is listed in reference to the Second Congo War (also called Africa’s World War and the Great War of Africa), where both sides of the multinational conflict hunted down Bambenga and ate them. Cannibalism and slavery are horrendous evils which must be entered into history and talked about for sure, but I couldn’t help thinking whose interests were served when the only mention of the Congo on the page was in reference to multi-national incidents where a tiny minority of people were  eating each other (completely devoid of the conditions which created the conflict no less). Stories which support the white supremacist narrative about the subhumanness of people in Africa are allowed to be entered into the records of history. The white guy who turned the Congo into his own personal part-plantation, part-concentration camp, part-Christian ministry and killed 10 to 15 million Conglese people in the process doesn’t make the cut. You see, when you kill ten million Africans, you aren’t called ‘Hitler’. That is, your name doesn’t come to symbolize the living incarnation of evil. Your name and your picture don’t produce fear, hatred, and sorrow. Your victims aren’t talked about and your name isn’t remembered.

Leopold was just one part of thousands of things that helped construct white supremacy as both an ideological narrative and material reality. Of course I don’t want to pretend that in the Congo he was the source of all evil. He had generals, and foot soldiers, and managers who did his bidding and enforced his laws. It was a system. But that doesn’t negate the need to talk about the individuals who are symbolic of the system. But we don’t even get that. And since it isn’t talked about, what capitalism did to Africa, all the privileges that rich white people gained from the Congolese genocide are hidden. The victims of imperialism are made, like they usually are, invisible.