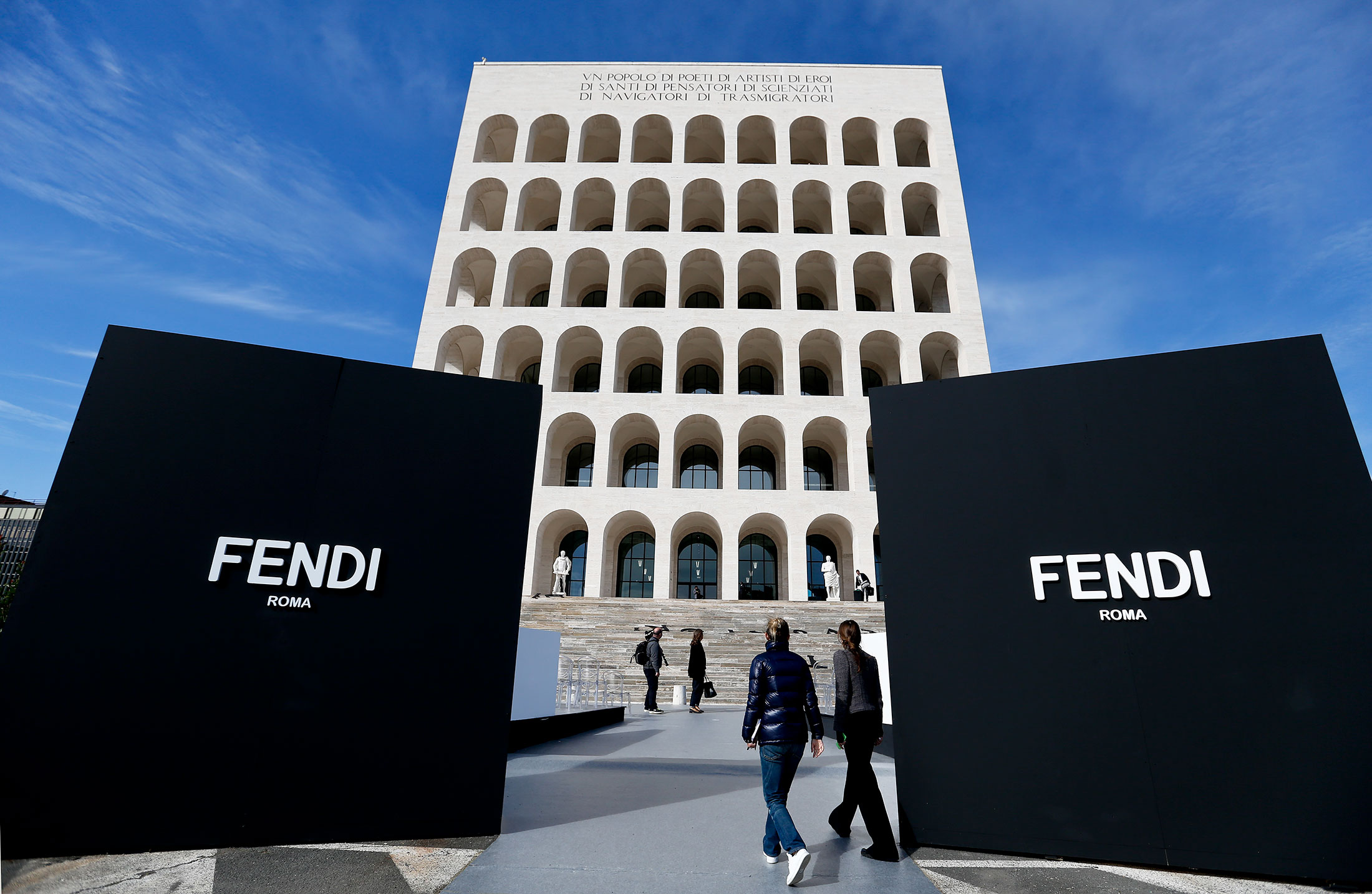 Fendi has a new home. On Thursday, the storied fashion house moved its headquarters into the Palazzo della Civilta Italiana in Rome, a six-floor geometric edifice of symmetrical arches nicknamed “The Square Colosseum.” The 75-year-old building is a World War II-era icon of Fascist architecture, shunning flair and gaudiness for brutal simplicity, and it has never been occupied. Here’s a peek inside, along with a preview of an art exhibition that is marking the occasion.

Owned by French luxury conglomerate LVMH, Fendi rakes in around $1 billion in annual sales. In recent years, it has worked to modernize under Chief Executive Pietro Beccari, adding e-commerce. “Learning about the client and integrating the client experience is fundamental for us and for the future of the company,” Beccari said earlier this year. “Fendi has good potential.”

There are 216 arches lining the palazzo, a structure that’s been rarely utilized since it was built in the 1940s. In 2013, the renowned maker of sleek handbags and lavish furs signed a deal to lease the space for 15 years. It took 18 months of renovation to get the building prepped for Fendi’s use.

Statues keep watch over the palazzo, an intimidating remnant of Italy under Mussolini. It was originally meant to be an exhibition hall for a world fair in 1942.

Architect Marco Costanzi headed the makeover of the interior. He also designed the Fendi headquarters in Milan.

Founded in 1925 in Rome, Fendi rose to prominence as one of the world’s preeminent designers of fur goods. Now it’s tasked with keeping the age-old label fresh.

Fendi is marking the occasion of its new headquarters with an art exhibition. Open to the public through March 7, “A New Rome. The E.U.R. and the Palazzo della Civilta Italiana” (E.U.R. stands for Esposizione Universale Roma) features a selection of paintings, photographs, and videos from Italian artists, architects, and filmmakers who’ve worked in the district, including Gabriele Basilico, Fabrizio Ferri, and Franco Fontana.

The creative minds behind Fendi are straight out of fashion lore: Karl Lagerfeld and Silvia Fendi.

A fashion empire built on fur, Fendi sources its materials from auctions everywhere from Finland to China.

The use of fur has sparked much controversy over the years. Animal rights groups protested outside a Fendi show in Paris this summer.

Fendi boasts a fleet of around 200 stores worldwide, attracting luxury buyers with a promise of exquisitely made ready-to-wear clothes, accessories, and fragrances alongside its fur goods.

Fendi’s new digs have a bookstore and gallery open to visitors. At 204,500 square feet, the office will accommodate Fendi’s 450 or so corporate employees.

Perched on top of a hill, the palazzo looks out on the Italian capital.

Beccari, a seasoned executive in LVMH, took over Fendi in 2012 and began work to boost awareness of the Fendi name and attract younger shoppers.

Under Beccari, Fendi added “Roma” to its label, a move to position the brand as fundamentally Roman. The relocation to one of Rome’s iconic landmarks solidifies that feeling.