A 2,000-year-old Egyptian child mummy discovered in a rubbish dump in France is to go on display for the first time outside Paris.

The mummified body of the toddler in a casket first came to publish attention when an unidentified local resident of Rueil Malmaison showed up at the municipal dump in 2001 and asked where to throw her “cumbersome” unwanted goods.

“She said: ‘Where shall I put this, it’s a mummy?’ We weren’t sure exactly what she was on about. She just said she was clearing her cellar,” Jean-Louis Parichon, an employee at the dump, recalled shortly afterwards.

“I immediately saw it was an extraordinary thing and put it to one side. Then when I’d stopped being astonished, I called the town museum.”

It took experts years to conclude that one of Napoleon’s generals had brought the mummy back from Egypt in the mid-1850s. He lived in Rueil-Malmaison.

A stylised bird feather and hieroglyphic inscription revealed her name as Ta-Iset (she of Isis). Archaeologist Christian Desroches Noblecourt said that the feather reminds the living that “the dead person’s heart must be as light as a feather to allow the soul to reach the afterlife following mummification”.

She is believed to date from around 350 BC and to come from the Akhmim region in upper Egypt on the east bank of the river Nile. 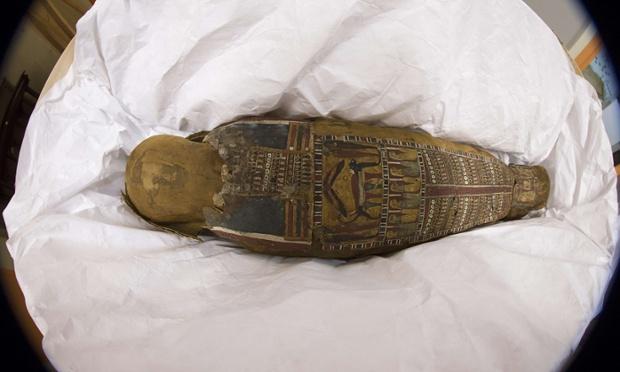 Radiographic scans suggest the mummy is that of a girl “in her fourth year” measuring 92.5cm. The skeleton is intact, with the head bent towards the chest. The child is thought to have belonged to the Egyptian middle classes, given the quality of the wrapping and casket.

“A cut from a knife can be seen on the side indicating that certain people have already tried to see if [the casket] contained precious metals or amulets,” said Marie-Aude Picaud, director of the history museum at Rueil-Malmaison.

The relic’s year-long restoration was funded by the local town hall but also by 119 public donors.

Ta-Iset will go on display behind hermetically-sealed glass in a temperature-controlled room at the town’s history museum.