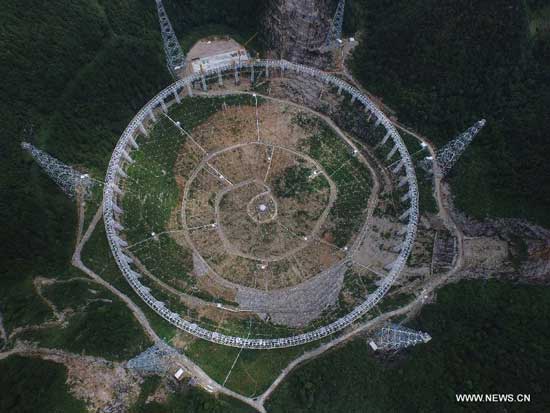 Is there anybody out there?

A massive engineering and scientific project in China is expected to take us one step closer in our quest to discover if we are truly alone in the universe.

The massive construction project — when completed the dish itself will be the size of 30 football pitches — has the potential to be a game-changer for our understanding of the universe, and our search for life on other planets.

When it is finished it will potentially be able to detect radio signals — and potentially, signs of life — from planets orbiting a million stars and solar systems.

China’s state-run Xinhua news agency says FAST will be completed in 2016 — allowing researchers to detect radio signals from as far as tens of billions of light years away.

Nan Rendong, chief scientist of the FAST project, told Xinhua that the huge dish will enable much more accurate detection.

“A radio telescope is like a sensitive ear, listening to tell meaningful radio messages from white noise in the universe. It is like identifying the sound of cicadas in a thunderstorm,” he said.

Its unprecedented precision will allow astronomers to survey the Milky Way and other galaxies and detect faint pulsars, and the array might also work as a powerful ground station for future space missions.

And, of course, it will advance the search for extraterrestrial signs of life.

In July, when NASA discovered an ‘earth-like’ planet named Kepler-452b there was understandable excitement.

It was in the so-called ‘Goldilocks zone’ — the right distance from its sun to support an atmosphere and liquid water.

But detecting radio signals — signs of life — from the planet is beyond the means of our current instruments. But not for FAST.

Wu Xiangping, director-general of the Chinese Astronomical Society, was bullish about its capabilities. “It will help us to search for intelligent life outside of the galaxy and explore the origins of the universe,” he told state media.

Construction on the FAST project began in 2011 and it is nestled in a natural indentation in Guizhou province’s spectacular karst mountains.

The remoteness of the location — meaning minimal interference from other radio signals — and the region’s topography make it an ideal site for a telescope of this kind.

When operational, it will surpass the current largest radio telescope, the Arecibo Observatory in Puerto Rico, which has a diameter of 305 meters.