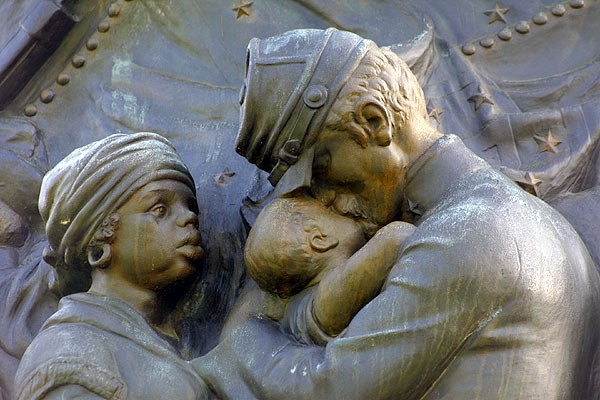 Senator Charles Stedman of South Carolina submitted Senate Bill S. 4119 “Monument to Faithful Colored Mammies of the South” (located in the General Files, 1910-1954 of Record Group 66 – Records of the Commission of Fine Arts) The bill would have granted permission to the Jefferson Davis Chapter No. 1650, United Daughters of the Confederacy to support the construction of the monument in Washington D.C. The only restrictions were that the monument could not be built on the Capitol, the Library of Congress, Potomac Park, and the White House.

The best example of the idea behind the monument can be found in the Washington Star newspaper which featured an article titled “Old Mammies” Memorial it says the memorial will be well received: “Affection and attachment between the white child and its colored nurse were the rule, and it was also the rule that when the child passed beyond the nurse age and ‘grew up’ the old nurse retained her special interest in that person until the end of life.” Further it said “The proposal…will be received with pleasure by a great number of men and women, a large proportion of whom are not old enough to have had a regular colored “mammy” before the civil war…there is a happy and tender sentiment behind the proposal…the colored mammy was an institution in the southern and border states worthy of being symbolized in stone and bronze.”

One of the most poignant letters in support of the monument came from Henry B. Field, a self-proclaimed “son of one of those ‘mammies.’” In his letter in the Washington Post, Field expressed the belief that through their recognition of mammy, the U.S. Government will begin to recognize the strides African Americans have made since the Civil War. He believed that by recognizing “mammy” it would make others reflect on the other good works done by African Americans in the South. Other defenders said it was the best way to remember someone pivotal to the raising of children in the South.

Designs for the monument reflect the image of an elderly black woman holding a white child. It can be compared to modern day images of “Aunt Jemima” brand products and the shape of the classic Aunt Jemima brand syrup bottle. Other designs submitted reflected a more somber image. These designs retained the same image with the mammy holding a white child while her own children stood off to the side begging her for attention.

Interestingly, one of the biggest controversies surrounding the monument revolved around the development of the model for the monument. In June 1923, artist Ulric S. J. Dunbar, “one of the most widely known sculptors of the national capital” charged that his design for the mammy monument was stolen by another artist George Julian Zolnay. In his comment to the Post, Dunbar remarked “’Why, look how the mammy is holding the white baby in my statue, and doing the same in his. See the treatment of the pickaninnies [sic] trying to have their mother pay attention to them….it is the same idea.”

Protest from the African American community was fierce. Led by W.E.B. Dubois, African American Newspapers printed numerous articles and comments condemning the monument. In Mammy: A Century of Race, Gender, and Southern Memory by Kimberly Wallace-Sanders, the author discusses Dubois comment in the book The Gift of Black Folk published in 1927. In the book, Dubois refers to the “mammy” as “one of the most pitiful of the world’s Christs…an embodied sorrow.” He then went on to say that any dignity that she had was stripped away once  the children she raised went on to lynch her sons. Dubois was a dedicated civil rights leader and outspoken critic of Jim Crow in America. His fiery writings and articles published during his time as editor of  the National Association for the Advancement of Colored People (NAACP)  sponsored Crisis Magazine brought him praise from many and scorn from those targeted by his writings. Having such an outspoken critic placed the building of the monument into jeopardy.

Soon after, other African American Activists and organizations began protesting loudly against the building of such a monument.  One of the groups to stand in opposition to the monument was the Northeast Boundary Citizens’ Association. In a statement, the group said that the monument was “propaganda” to take attention away from the deplorable treatment of African American women in America. They also felt that if a memorial were to be built, it should be placed nearer to the homes of those “mammies” so that they could benefit from seeing it. A group of black female leaders also wrote letters of protest and presented them to Vice President Calvin Coolidge and speaker of the House Frederick H. Gillett.

In the end, the monument and the bill to support the monument fizzled under pressure brought by black activists and the black community against its construction.

Originally posted: Celebrating the Faithful Colored Mammies of the South