Entrepreneurs love to claim they’re “reinventing the wheel.” So what do you say when you’ve actually reinvented the wheel? “I love spokes, I’ve just come up with something different,” explains Sam Pearce, a British designer who, if you haven’t guessed already, created a spoke-less, shock-absorbing wheel that’s being used on wheelchairs and bicycles. Loopwheels, as its called, was recently shortlisted for the London Design Museum’s Design of the Year award. When we first covered the product in 2013, cycling enthusiasts gave it a ringing endorsement, saying they were “immediately impressed at the ride quality.” Since then, Loopwheels has expanded from bikes to wheelchairs. Pearce is an inventor and design consultant. He’s worked on non-invasive surgery equipment, early handheld PCs of the Palm Pilot era, 3-D folding mechanisms, and motorbikes. It’s always something new, and in 2007, it was baby strollers. Around that time Pearce was sitting in an airport in the Netherlands, waiting for his flight. He noticed a woman pushing a stroller. “As the woman got to a curb, she didn’t lift the front wheels and the baby was shot forward,” he says. “If the wheel hits the curb at the wrong angle it’s useless. So I just wondered, why can’t you put the suspension into the wheel?” Baby strollers make for a great case study in how wheels interact with impact, which is to say, not very well at all. A stroller has shock absorbers underneath the seat, which helps reduce bounciness, but it doesn’t keep the wheels from bouncing backwards when they hit a curb head on. In a matter of about five seconds, Pearce had a new idea. He began envisioning a system that incorporated shock absorption directly into the wheels, making them capable of flexibly rolling over bumps instead of just rebounding. He drew a sketch, and then put it aside for two years. At the time, “it wasn’t relevant,” he says. “I couldn’t really see how I could make one, but I have lots of ideas, and this one kept coming back to me.” So in 2009 Pearce took some rubber piping from a rain gutter, and cut it into six-inch strips. He looped those around inside a plywood wheel, and started running it over a tabletop, using his fingers as dummy speedbumps. Even with that crude prototype, Pearce saw he was onto something. 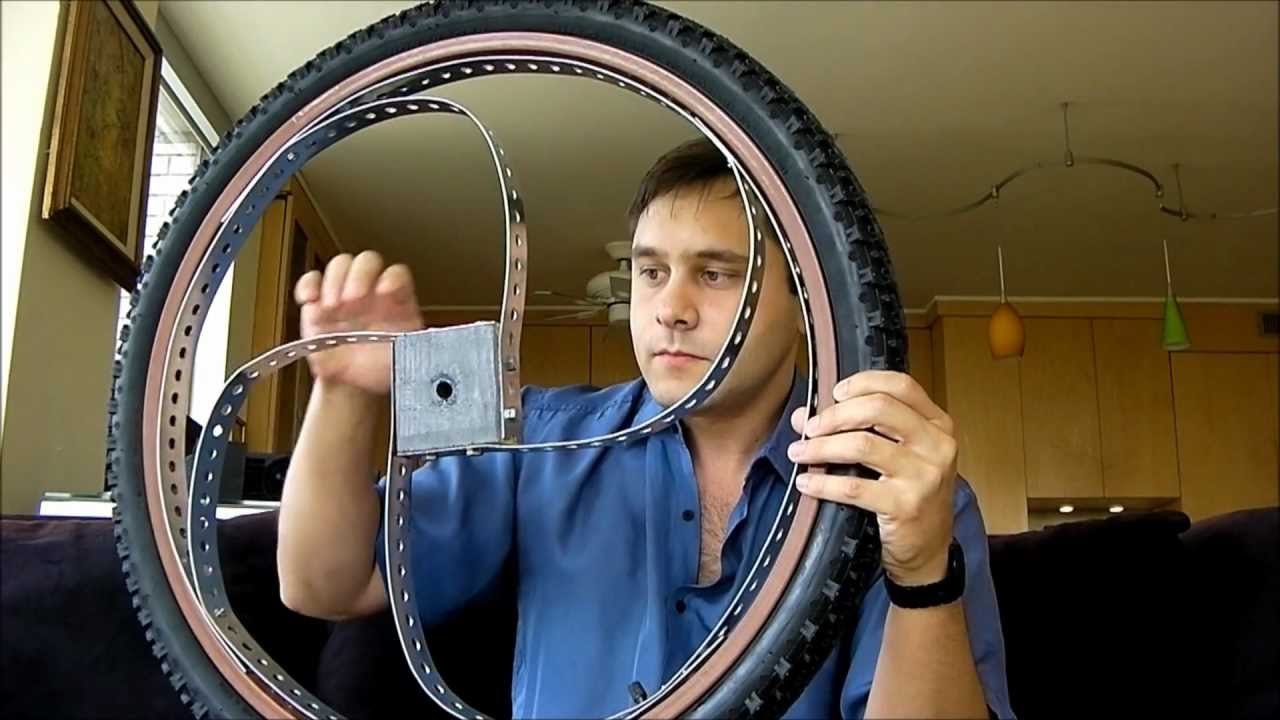 There are myriad remakes of the traditional spoked wheel—an invention that’s actually still incredibly efficient thousands of years after its invention. Pearce’s isn’t the first to put the shocks inside the wheel. One modern version came from a farmer in Tel Aviv, who broke his pelvis and then went through extraordinary discomfort trying to wheel his wheelchair around his crops. His design for SoftWheels involves compression cylinders within the wheel frame. Pearce actually started his research by going back further in time, with a patent search. It revealed other British and European designs from the early 1800s that use a similar technology. But these early ideas all called for steel springs, whose metal would fatigue and break over time. Pearce tested it out himself: “My first wheel had steel springs, and it was more to see if I could ride a bike with it,” he says. “Those steel springs weren’t going to last very long.” He reasons that’s why these early pneumatic wheels never took off. Plus, they made a lot of noise. 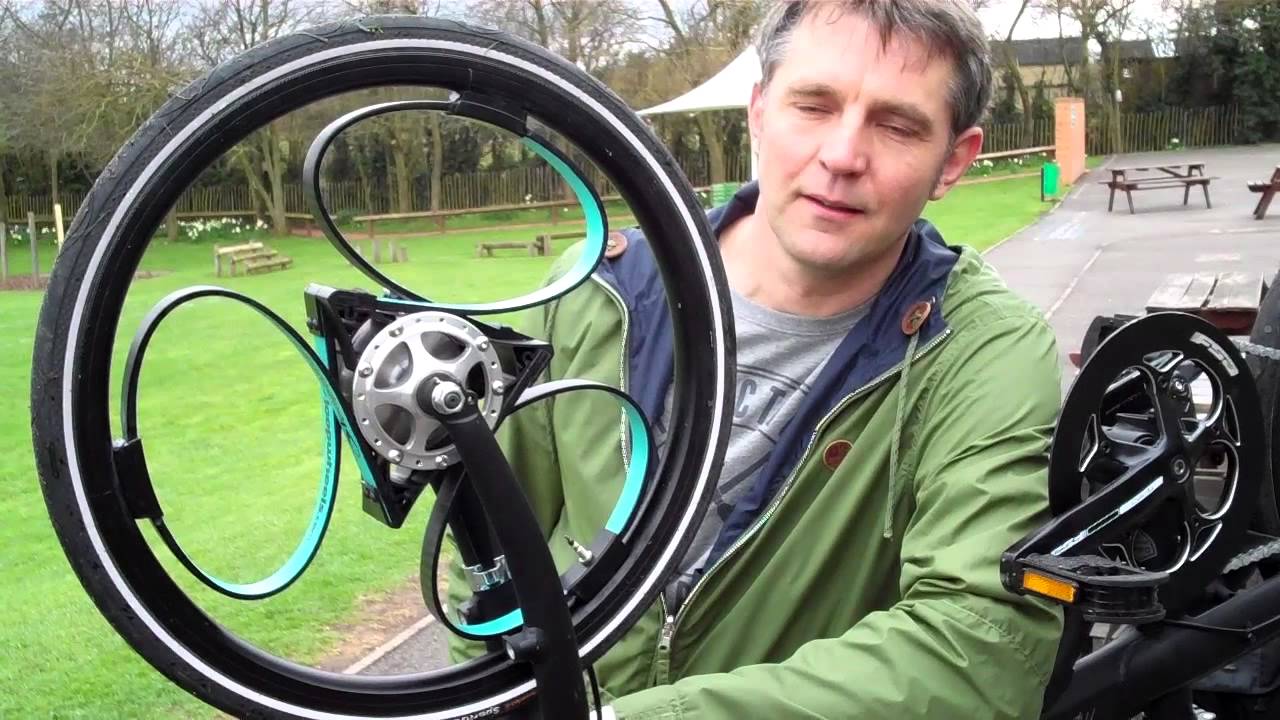 Pearce took the problem to a local archery shop in Nottinghamshire, where he lives. A good bow has to perform similarly to a good wheel: It needs to be incredibly strong, but also flexible enough to accommodate the full range of human motion. Pearce went to them with his “very bad homemade springs,” he says, to see what they could cook up. “I knew I knew I needed a composite spring,” Pearce says. “They have to feel like you’ve got compression, and they have to have a certain feel. If it’s too soft, it feels like you have a flat tire.”

After some 70 iterations, Pearce and the team of bow-makers hit on the right recipe. It’s proprietary, but Pearce describes it as a “carbon composite construction.” Loopwheels first debuted on bikes—mountain bikes are next—before a wheelchair manufacturer caught wind of the new wheels and started sourcing them from Pearce. “We say it’s triple-smooth,” Pearce says. The suspension in the wheels smooths out any traveling over bumps, and “gets rid of all the road buzz.” That’s crucial to wheelchair users, whose bodies are in full contact with the vehicle, meaning they often absorb road shock right along with the chair. Equally important to users? Cost. Pearce says he more or less arrived at an ideal design two years ago, but has since worked on refining manufacturing techniques, in part by adopting processes from the auto industry, to get the price down from $2,000 a wheel, to a few hundred dollars (depending on the model). “There’s only so much people will pay for new technology,” Pearce says. That’s true for wheelchairs, and it’s true for mountain bikes, which Pearce says is next in line for Loopwheels.