When I first rolled out in the 2015 BMW i8, I didn’t see the point. I drove this low-slung concept-looking plug-in hybrid under electric power until its limited battery range ran out, then watched as the fuel economy dipped well below 30 mpg in hybrid mode. But when I put it in Sport mode the truth dawned. The engine roared and blipped when I shifted gears and it handled the corners better than any BMW I had driven before.

The i8 is a sort of hyper-hybrid, what might have happened if Ferrari had developed the Prius. It exhibits two very distinct personalities: energy-obsessed engineer and troubled youth. Driving it in its Comfort and Eco Pro modes, I could have parked and forgotten all about it, but after moving the shifter to Sport mode nothing short of violence was going to get me out of the i8.

Hitting production in conjunction with the more affordable and mundane i3, the i8 represents BMW’s radical rethinking of personal transportation in light of climate change issues and shrinking fossil fuel supplies. The i8 seems like a first effort by BMW to bring in new century efficiency yet maintain its performance legacy, and it will cost you dearly.

Base price in the US comes to $135,700 before adding any of the available “World” trim levels. UK buyers are looking at £99,845, although the i8’s electric-only mode should avoid congestion charges and preserve the village green. Below the equator, Australians are looking at $299,000 for the i8, but just think how many more mutants Mad Max could evade on a precious gallon of gasoline.

The i8 is certainly an extraordinary-looking vehicle, as if BMW built a concept car then forgot to get rid of all the interesting bits before putting it into production. While driving it, I got more attention than I had in even the bright orange McLaren 650S Spider.

Power front and back

Beyond its concept-car looks, the i8 uses a completely unique drivetrain, bearing no resemblance to even BMW’s own hybrid vehicles. Tucked away somewhere in the car is a turbocharged 1.5-liter three-cylinder engine using BMW’s valve timing and throttle control technologies to produce 228 horsepower and 236 pound-feet of torque, driving the rear wheels through a six-speed automatic transmission. That engine, a variant of that found in the 2015 Mini Cooper, gets a little help from the 11-horsepower starter motor, smoothing over turbo lag. Driving the front wheels, the i8 uses a 129-horsepower electric motor, powerful enough to move the car all by itself when the 5 kilowatt-hour battery pack has enough charge. Oddly, a two-speed transmission sits between that motor and the front wheels. Filling the battery pack takes just 1.5 hours from a 240-volt source, and gives the i8 22 miles of zero-emission range.

BMW sets the total power output for the i8 at 357 horsepower and 420 pound-feet of torque, with a 0 to 60 mph time of 4.2 seconds. EPA figures show 76 miles per gallon equivalent, 28 mpg average on the gasoline engine alone. However, as is typical with plug-in hybrids, mileage will vary drastically depending on how frequently the car gets charged up.

Further setting it apart from the BMW line-up, the i8 makes use of carbon fiber for its passenger compartment and aluminum sub-assemblies for engine support and chassis. Unfinished carbon fiber was in evidence when I lifted the upward-opening doors, a subtle means of calling out the i8’s use of this exotic material. That construction helps keep the weight down, but the i8 still tips the scales at a 3,455-pound curb weight. 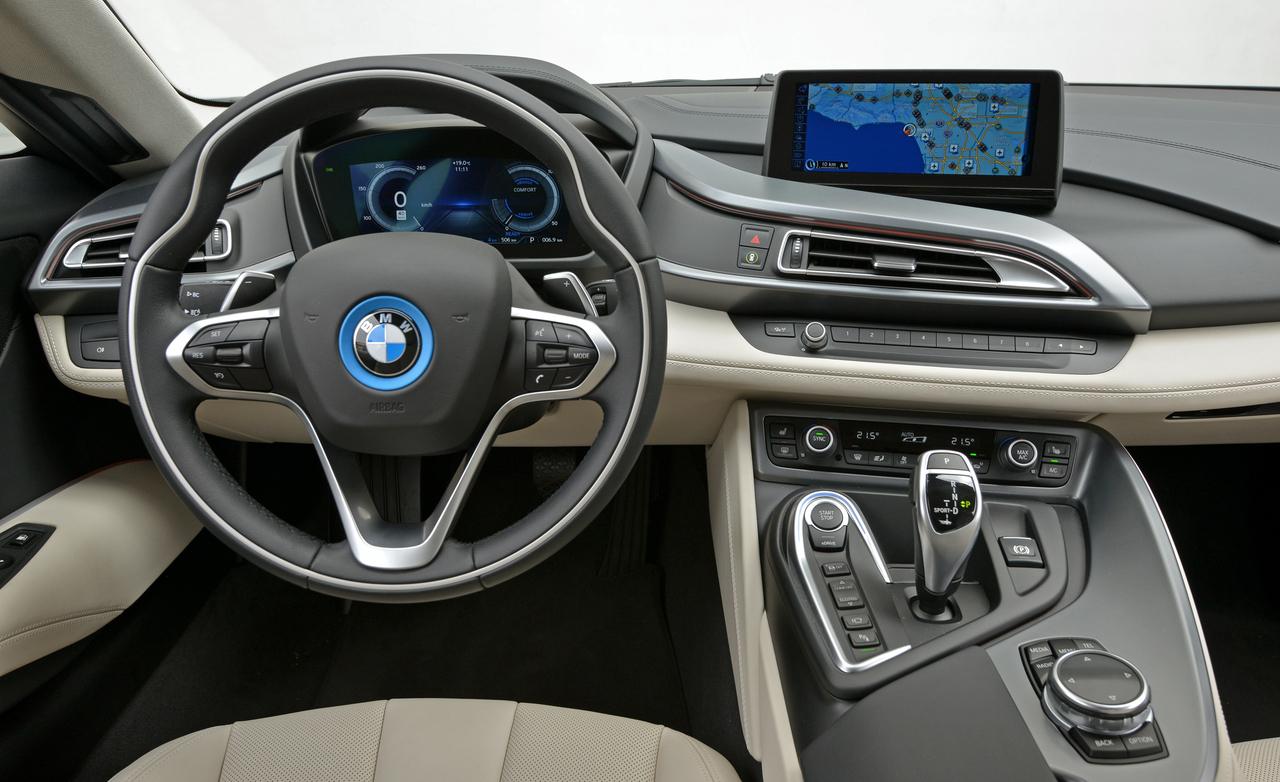 I wanted to get a look at the engine, but the manual deterred me with a note that the hood could only be opened by BMW service personnel. However, a couple of simple latches in the cargo area let me gaze at the black metal box containing the battery pack, occupying a mid-body position in the car. A hatch on the left front fender covers a J1772 electric vehicle charging port, while a standard fuel filler sits at the right rear.

After limbering up with a few stretches, I worked my way under the door and into the driver seat. The i8 uses 2+2 seating, meaning there are padded spaces behind the rear seat where I could put my computer bag or possibly some groceries. A compartment under the rear hatch could have held a couple more grocery size bags.

Appropriately for a car from the future, the i8 lit up accent lighting and various screens around the cockpit when I pushed the start button, but no burst of combustion broke the quiet. In Comfort mode by default, the LCD instrument panel tinted its speedometer and power gauge blue. BMW’s usual rocker switch for drive modes, mounted on the console, only offered Comfort and Eco Pro modes, lacking the Sport and Sport Plus settings of other BMW models. A button labeled eDrive on the console promised to keep the i8 driving under electric power, if the battery would allow it, while the shifter had a pull-to-the-left Sport position.

With 9 miles of electric range remaining, I piloted the i8’s attention-getting body into a typical city traffic slog. The car felt comfortable and light, easy to maneuver and putting me in a lower position versus traffic than even in my own Z3 Coupe. The i8 accelerated smoothly, obviously metering out the electric motor’s 184 pound-feet of torque to prevent jerkiness. And where I was used to seeing other electric cars drop apparent range much more quickly than the distance I covered, the i8’s range display appeared true to its word, matching mile for real mile.

Coming to one of San Francisco’s notorious hills, I heard the i8’s engine kick in, seamlessly intervening to keep strain off the battery. BMW uses the navigation system to look at the road ahead, adjusting the drivetrain power output in advance of ascents.

After depleting the battery, the car switched to hybrid mode. At least I assume it did, as the engine remained very quiet under normal acceleration. In fact, the i8 really felt no different between electric drive and hybrid modes. Switching from Comfort to Eco Pro detuned the throttle a little bit and reduced power to climate control, a big energy saver when outside temperatures aren’t too extreme. The electric power steering felt loose and easy, making driving this extraordinary-looking car an easy and uninteresting experience.

In electric mode, the trip meter showed 99.9 mpg, but as I drove in hybrid mode that figure dropped like a very heavy rock from a very short building. Within an hour of driving I was down to the mid-20s, making me seriously question the value of the i8.